My last post was  a critical look at Exhibition Road, where you can see what happens when politicians throw money at roads hoping they'll turn into civilized places, putting expensive granite surfaces as if they were doing a bathroom makeover. And with roads as with bathrooms, if you don't address what flows through them, they remain very unpleasant places.

Unfortunately, the idea that you can create attractive streets where people feel relaxed and want to linger simply by tinkering around with road designs and without addressing through-traffic has currency in many authorities, including Merton. Wimbledon Broadway has recently had a lot of money spent on it, widening pavements, installing benches and the odd tree, and removing 'clutter'. The result of all this is cyclists have less parking (less railings, you see), pedestrians are a bit less cheek-by-jowl on the pavements , but it's still a very 20th century experience with multiple traffic lanes, and long delays if you wish to cross from one side of the road to the other. In short, not the best shopping experience.

For cyclists, conditions are somewhat improved (but then they could hardly have got worse). 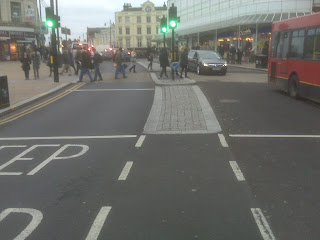 Above: outside the station concourse there is a single lane heading southeast, compared to the two lanes previously, so there is more room to filter past the traffic. Also, some of the central perch-points, like the one in the centre of the picture, are flush with the road surface so it's possible to ride over them to overtake stationary traffic. 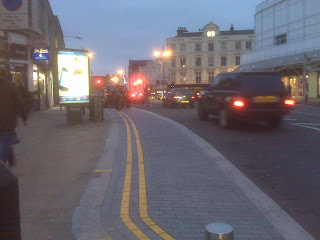 Above, between the station concourse and the Prince of Wales pub, there is a loading and parking bay. This says a lot about the priorities of the road designers. This space could have made an ideal cycle lane. 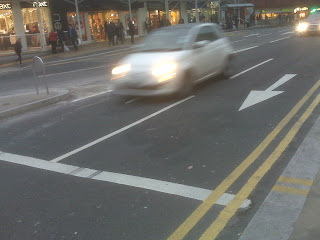 Above: opposite Next there used to be an advance stop box. That's gone, and there are now two narrow lanes making filtering difficult and dangerous. 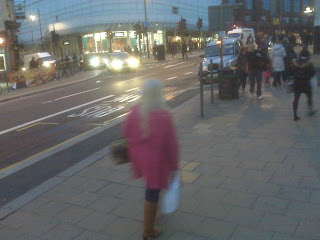 Above, opposite the Prince of Wales, there's a taxi rank. 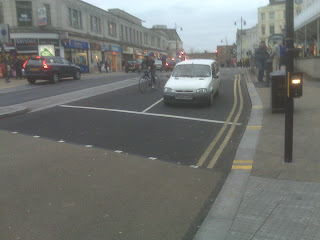 Above, still two lanes northwest opposite the station concourse, but the flush perch-point enables overtaking of queues, and the removal of the sheep-pen crossing seems to have widened the road. There's an advisory cycle lane between here and the Alexandra Road junction, and at that point there are two rather than the previous three lanes. However, the cycle lane brings you inside of a lot of left-turning traffic, which is a significant hazard.


However, this is still a decidedly car-centric place. Most parents wouldn't let their kids cycle in these conditions, and remember - this is the only place it is possible to cross the railway track without going a mile out of your way. So if you live, say, in the Ministers area with your kids and want to visit Wimbledon Common by bike, you have a choice - lug your bikes up a couple of flights of steps over the pedestrian bridge at Alt Grove, or this. Or you could ride down to Lower Downs Road, making a detour of well over a mile.

Merton Council have spent a lot of money bringing the Broadway up-to-date, and yet it's still behind the times. Successful high streets are pedestrianized, and in an area like Merton the town centre should have safe access for cyclists - a lot of people live within easy cycling distance. There are a lot of relatively quiet residential streets leading up to Wimbledon Town centre, but Merton aren't interested in leveraging this asset and giving residents safe cycle routes - there remains the intimidating barrier of the one-way system, which like all gyratories is a relic of a bygone era.

It is very clear that the facelifted Broadway has been designed without cycling as a priority. The improvements (such as they are) for cycling are coincidental rather than by fiat. But even with the improvements, conditions are still bad. Cyclists are still expected to mix it with two lanes of motor traffic, and drivers are changing lanes often, adding to the hazards. There is no roadspace given over to cycling.

Although there are some excellent individual bits of infrastructure in Merton, my overall verdict is there are not many similar boroughs in London that are worse for cycling (Westminster is the bottom of the barrel). That's because Merton don't consider cycling when they design schemes like the Broadway. Even though Merton is supposedly a Biking Borough. Cycling is not a transport mode at Merton, otherwise it would have been considered in the Broadway redesign. Cyclists are considered when there's a cycle scheme (which isn't often) but ignored most of the time. In fact, for most of the places in Merton that you'd actually want to cycle to - town centres, leisure centres - routes are discontinuous, illogical, or just plain absent. At Merton, cycling and road schemes are two different things. To give you an idea of how seriously Merton takes cycling, look at the cycling part of Merton's website. There's no nominated cycling officer. If you look at the Cycle Network link on the website, two of the 'proposed' schemes, Green Lane and North Road, have actually been in place for two years - which means no-one's bothered to update the website for at least that time. (The Green Lane scheme is crap by the way - see here for Cycalogical's take on it).
at 5:26 PM