You gotta love Boris. He really is the master of the improbable, not to say stupid, vision. Airports in the sea. Roads underground. And now, cycle lanes in the sky!

The Times reports that Boris "is considering proposals for a raised cycle network between mainline stations in London" similar to the High Line in New York. The difference being, High Line is a linear park along a disused railway (and interestingly, the park rules prohibit bicycles, skateboards, skates or scooters), whereas Boris is proposing putting cycle paths alongside existing, working, extremely busy raised railway tracks.

Now, unless I miss my guess, there isn't a huge amount of spare room on the elevated tracks in London. It's not like they were built with a wide strip of surplus land on each side. (That's the great thing about railways - they are extremely compact in terms of space used per passenger journey.) You can't have cyclists riding a foot away from trains whooshing by at 60MPH, for the same reason you're advised to stand back from the platform's edge at a station, although Boris would probably tell you that it's perfectly negotiable if you keep your wits about you. I suppose you could have some kind of cantilevered arrangement to hang a cycleway off the side of existing viaducts and bridges, but that would be very complex and cost a fortune. Some parts of the railway do have enough spare land to form a cycle track, but there are so many bridges and points where the spare width isn't sufficient. A further problem is that you will need regular points of access, so that people can join and leave the railside paths. If the track is elevated by, say, twenty feet, you would need ramps of 400 feet in length to give a reasonable 5% gradient.

Now, don't get me wrong, I'm all in favour of original ideas and creative solutions. But wouldn't it be a lot easier and cheaper to stay at street level most of the time? Building cycle flyovers or tunnels to take cyclists safely through junctions wouldn't be a bad idea, connected to proper segregated cycle paths, of course. Or we could just do what the Dutch do, which is proven to work and is (now this really beggars belief) mainly at street level. If there's one thing the Olympics has proved is that London's road network can carry essential traffic plus lots of extra Olympics cars and still be fairly empty. In other words, TfL's standard excuse for doing nothing for cyclists - that every motor journey is essential and traffic flow is paramount - has been shown to be a lie.

But where could you put segregated lanes at street level on London's busy streets, where we are continually assured there is no space?

How about here, on Victoria Embankment (below): 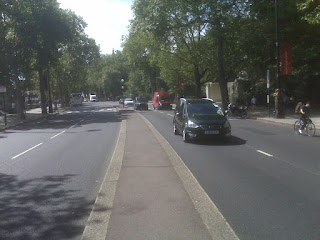 As you can see, there is a wide central reservation, whose main purpose is to enable motorists to exceed the 30MPH speed limit in safety. Reallocate that space and you have a decent cycle lane.The road also has parking for coaches, which could quite easily be reallocated to nearby streets - there are plenty that are wide enough. This embarrassment of under-used and misallocated space runs all the way from Westminster Bridge to Blackfriars Bridge and would yield plenty of room for a good segregated lane,  even without reducing the number of  general traffic lanes.  Why doesn't Boris do this? Perhaps because it's a lot more boring than putting cycle lanes in the sky?