The latest piece of nonsense is the installation of a chicane barrier at the junction of Meadow Road LCN3 route and Kennington Oval. 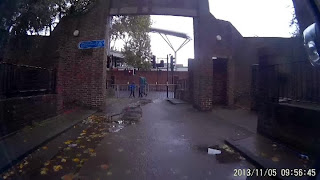 The last thing that is needed on this bit of cycle route is a barrier. There is considerable cycle and pedestrian traffic at peak times here and a significant problem is the already-inadequate amount of space. So you'd have to be completely nuts to want to compress all that traffic between two metal barriers thus: 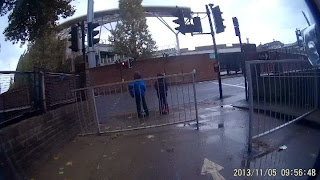 Another unfortunate consequence of this is cyclists will emerge on the right-hand side of the crossing, which is the wrong side given that most will be turning left. So they will be turning across the path of pedestrians - resulting in conflict. Altogether more sinister still is the 'return journey' turning right off the Oval towards the camera in the above picture. This is a very dangerous turn where sight-lines for drivers are impaired, and it is not safe to wait in the carriageway to turn right. With the barrier in place, the right-turning cyclist's options in terms of speed and direction are reduced, making a dangerous situation even worse.

I have no idea why Lambeth have spent what must be a considerable amount of taxpayers' money on this crap. Maybe there was some minor, or possibly major incident, the response to which is, via some unfathomable logic, to increase the amount of unnecessary street clutter, reduce the amount of usable space, increase potential conflict, and make cycling just a little less safe and pleasant. This small area of Harleyford Road around the Oval is dangerous, inadequate for both cyclists and pedestrians, and Lambeth have now made it just a little bit worse.

(It is worth noting that Kennington Oval will be on the route of CSH#5, which hopefully will sort out some of the problems at this junction, but it's not going to be helped by the complete lack of joined-up thinking that is manifest here. More evidence then, as if any were needed, that London's processes for providing cycling infrastructure are broken by design.)
at 6:02 AM