The Mall Closure - Why?

The Mall and Constitution Hill are currently closed to motor vehicle traffic. Something to do with some jubilee or olympics or something.

Unfortunately, despite this being a very wide road by London standards, not content with declaring war on the motorist, they've also banned cycling. Which is a bit of a shame because this forms part of a continuous segregated cycle path that runs from Kensington nearly all the way to Admiralty Arch.

I guess the powers that be must have thought: with all the disruption to motoring and public transport, why should cyclists get off scot free? Let them share the pain. And there were a lot of unhappy cyclists when I visited.

There's no other obvious reason to ban cycling. Below you can see there's not shortage of space, so much of it in fact that there's a VIP lane for privileged cars: 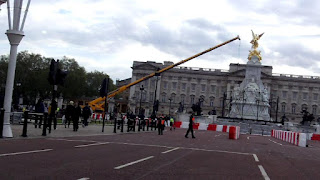 It's not cost either. Lots of money for big signs saying "NO CYCLING ALLOWED" and platoons of officials in orange jackets to enforce it: 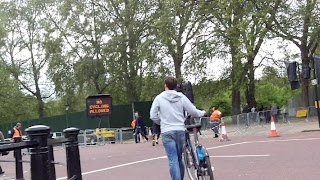 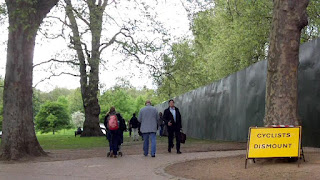 It can't be security or safety either. Lots of pedestrians milling around, with bags capable of holding as much ordnance as a cyclist could.

Below you can see the VIP "site access" lane on Constitution Hill. There's clearly plenty of room to move the VIP lane 2 metres to one side to provide a cycle lane. 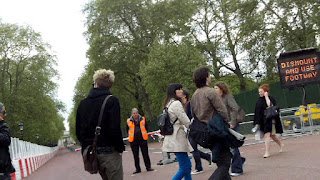 It's not even as if anything much was going on the two days I visited - certainly not enough to justify excluding cyclists.

Luckily, this won't be lasting long because Boris and TfL has declared war on crap roadworks:

"The standards state that all roadworks sites should:
In addition, companies should help keep London moving by scheduling work outside peak hours, re-opening the road at peak times and, where possible, working 24-hours-a-day or extended hours.
...
The Mayor said: 'We are now putting in place better ways to empower Londoners to name and shame those who blight our city with disruptive or badly managed roadworks.
'These reports will be followed-up with swift action by the relevant authority to help unclog roads suffering from unnecessary delays."

You can make a report at this website just in case they don't get the message.
at 1:40 PM 13 comments:

Bear with me on this one, it's going somewhere I promise you.

There’s a lot of stories doing the rounds of the Interweb about diesel cars that are fitted with particulate filters suffering with premature failure of this expensive part.

What's a particulate filter? Briefly, if you’re as old as I am you will associate diesel engines with lots of black smoke. Over the years, the manufacturers have cleaned up the exhaust emissions, and although you see the odd vehicle (often a black cab) belching out soot, they are generally a lot cleaner than they used to be. This is in part due to the fitting of a Diesel Particulate Filter (DPF). What the DPF does is trap the soot, thus cleaning up the exhaust. When the filter reaches a high enough temperature, the soot will simply burn off, like a chimney fire, thus cleaning the filter. However, if the vehicle is used for a lot of short urban journeys, the filter may never reach the required temperature to burn off the trapped soot. The engine management computer can detect the soot build-up, and can force the filter up to temperature by injecting extra fuel into the engine, or by various other methods, but this doesn’t always work, and if the driver ignores the warning lights indicating excessive soot build-up, the vehicle may end up needing a very expensive new filter, or worse.

Over 50% of new cars sold in the UK these days are diesel. No surprise there – with escalating fuel costs, buyers are tempted by the superior efficiency of diesel, plus there’s usually a cost advantage in the form of lower vehicle excise duty. But, being the car-dependent nation that we are, a significant number of those cars will be used for exactly the type of short urban journeys that are the enemy of the DPF. But for a lot of people, the car is the default mode of transport, and they expect to just be able to jump in their car and go without having to worry about dashboard warning lights. As a result, car manufacturers have taken to warning potentialcustomers of this issue, and steering them towards petrol cars. This is a shame in environmental terms, because although they emit lower amounts of certain pollutants than diesel vehicles, petrol-fuelled cars have significantly higher CO2 emissions.

In the quest for lower emissions, manufacturers have been coming up with more and more technological solutions, and the result is cars that are becoming more and more complex and less reliable. If people used a bike for their short urban journeys, that would reduce emissions, fuel bills, and reduce the probability of their DPF failing. (It would also reduce the probability of their heart failing, as an additional bonus.) Maybe manufacturers should include a free bicycle with every diesel car. Even a decent bike is cheaper than a DPF, and a bike will last a lifetime.
at 1:51 AM 5 comments:

Last week I had the rare misfortune to have to drive a car through London in the middle of the day. The journey between Shepherds Bush and Putney must have taken about an hour, for a distance of about 4 miles. It would have been quicker walking, although with the amount of clutch-pumping I was doing, driving was pretty good exercise. What was causing the congestion? No evidence of accidents or roadworks, and it was the middle of the day rather than rush hour. This I guess is a typical experience for anyone who makes that journey on a regular basis.

No doubt if you are knowledgeable about the local roads you can find a circuitous route to avoid some of the delay,  making the adjoining residential roads noisier, more polluted and more dangerous for pedestrians, children and cyclists. The council have taken some measures to thwart such rat-running, with one-way streets and the like, but with limited effect.

This situation is exactly the kind of thing that Boris Johnson needs to get to grips with in his new term of office. Congestion is a significant cost to the economy: the hour I wasted was an hour of productive work lost, and there were no doubt plumbers, couriers, taxi drivers, computer repair people, goods vehicles, personal trainers, carpet fitters, salespeople, antique dealers, etc., etc., the whole Yellow Pages of professions and businesses, all caught up in the same queue and all losing an hour's work. Scale that up London-wide over a year and you have a massive productivity problem that is holding the London economy back.

What to do about it? Unfortunately Boris has no answers. Conservative ideology seemingly prohibits regulations restricting the right to drive, and he's set his face against road pricing as well. Boris is an incorrigible optimist who seems to think that problems solve themselves, through the magic of freedom of choice and free enterprise.

One answer would be to build more roads. This is impossible in London, because there is no spare space. People don't tolerate elevated motorways any longer. Tunneling is a possibility, but is eye-wateringly expensive - far too expensive in the age of austerity, especially if there is no road-pricing to pay for it. And of course there is the fundamental problem that more roads brings more traffic, which simply moves the congestion problem to somewhere else, where you haven't built a tunnel yet.

Part of the congestion problem  is that people don't see a realistic alternative to driving. Buses aren't much of an alternative if they're caught up in the same congestion as the cars. For most people, cycling isn't an alternative because even residential roads are perceived as too dangerous for cycling - mainly because they're full of the rat-running traffic I referred to earlier trying to avoid the congestion hotspots. So people are driving distances of less than a mile in some cases, distances that are  cyclable by anyone of average fitness. We know at least 50% of London car journeys could easily be cycled - we also know the main reason people don't cycle is fear of traffic, although 30-40% of people would like to cycle. In simple terms, there is no good reason why London can't be like Amsterdam.

There really is very little point in Boris's investments in cycling - the bike hire scheme, the "superhighways" - because they don't get people out of their cars. That is because these investments don't address the reason why people drive rather than cycle in the first place - safety. Bike hire is for the amusement of tourists, and for a small band of brave commuters avoiding the escalating cost of tube travel. But according to TfL, very few people have switched from cars to hire bikes. The Superhighways are almost entirely superficial - they look nice in parts, but all around the blue paint there are dangerous junctions and an encyclopedia of safety problems that have been ignored by TfL because solving them might cost money and/or disrupt the flow of motor traffic. That's the flow of people in motor vehicles who in a significant number of cases would rather be cycling, but don't because the superhighways aren't safe.

My appeal to Boris is this: stop treating cycling as some sort of expensive, taxpayer-funded play scheme. Cycling is not a game, it is a transport mode, and one that is well-adapted to the age of austerity by virtue of its low infrastructure and low end-user costs. This is a city that desperately needs a bold strategy to relieve it of congestion. Make cycling in London safe and that will stand as a worthy legacy, with lower transport costs, better public health and an improved environment. Do nothing and London will fall further behind its European competitors, who already have more efficient transport systems in which cycling is an increasingly integrated and important part.
at 1:15 AM 3 comments: