As a rule, we don't get all holier-than-thou on this blog about RLJing.


However, there is a difference between on the one hand riding carefully with full awareness of the hazards around you, and respect for the safety of others but with a "relaxed" interpretation of the rules, and on the other hand, putting other road users in danger.

On The Mall this morning: 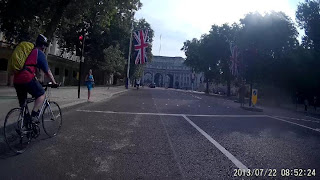 Above, you can see the lights are red and there's a lady waiting to cross. If you really have to jump the light, at least steer over to the middle of the road and give her plenty of room. Not like this: 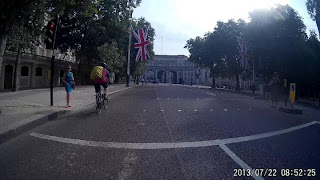 And certainly not like this, when she's actually stepping into the road, and you have to swerve to avoid her, because you haven't got a clue what's going on beyond the end of your nose: 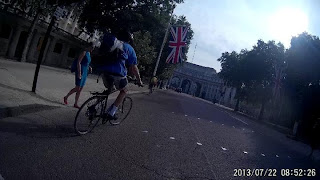 Three deaths of cyclists in the space of three weeks. Grim reading, and an indictment of the lack of progress in improving safety on the highways of this city.

In general we are supportive on this blog of the Mayor's plans for improving the experience for cyclists. But the problem is that the delivery of even the first of those plans is still some way off. Even the most optimistic of observers would struggle to conclude that we won't have to wait decades before we have anything approximating to  a London-wide safe cycle network. And in the mean time, cyclists have to put up with a road network that in parts is designed as if no-one cycled in London.

So it follows that there needs to be a short-term plan in place to mitigate the worst excesses of existing car-centric highway design. And one of the worst examples of this is Holborn, where Alan Neve was tragically killed on Monday. 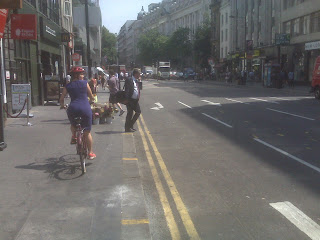 The stretch on which this fatality took place is 4 lanes wide and one-way as you can see from the picture. The left and right lanes are left and right-turn-only respectively, so if you want to go straight on, you need to get right in the middle of the traffic. When the lights change, it's a racetrack, and you'll have vehicles passing you left and right. There is no advance stop box, no cycle lane and no bus lane. (The road is usually full of traffic of course, which you can't see from the picture. You will however notice a female cyclist, on the pavement, no doubt deciding that the chance of a fine is a worthwhile tradeoff to avoid a chance encounter with a construction lorry).
To make a bad situation a lot worse, along with the multiple lanes, the Holborn gyratory is also surrounded by a network of one-way streets. In the immediate vicinity, the following roads are one-way (working around the points of the compass from North):


View Larger Map
In fact, it would have been a lot quicker to list the streets that aren't one-way. Unless you have a map-like knowledge of the back streets, it is very difficult to avoid the dangerous thoroughfares in this area.

Next we have to ask why all these streets are one-way. Quite simply, the area gets very congested, and to avoid motors trying to rat-run their way around the pinch-points and creating increased road danger followed by total gridlock, it's been necessary to close off the side-streets one by one precisely to make the main roads impossible to avoid. Because the planners didn't consider the effect on cyclists, who don't create congestion or significant road danger, bike-riders are caught in the same fine-meshed net as other traffic and forced onto roads that don't have any provision for cycling, and furthermore are designed in a way that presents the maximum possible danger to vulnerable road users as a side order. Only two of the 27 one-way streets listed above have a cycle contraflow and there appear to be no exceptions for cyclists.

Getting rid of one-way restrictions for cyclists is an easy and cheap thing to do. I also do not believe it is beyond the wit of man to devise a clearly-signposted set of routes along the backstreets in this area, perhaps with a couple of strategically-placed crossings to enable safe passage across the major roads. All this could be done within the space of a year, probably less if we treated the issue as a something that could result in unnecessary loss of life.

"Why should cyclists all of a sudden get investment ahead of motorists?"

The answer to this question is in Holborn. In the past, we invested in motoring to the exclusion of other modes. Not only was cycling not invested in, it was deliberately designed out and marginalized, on the basis that cycling was an old-fashioned and unsatisfactory way of getting around, obstructed the free flow of motor traffic, and everyone would soon be able to drive everywhere. That policy failed, and we need to fix the consequences. To say that Holborn needs investment in cycling is a bit like saying Hiroshima needed investment after the second world war.
at 6:28 AM 2 comments:

Ride London - A Bridge Too Far?

Ride London is a weekend of cycling, including:

London-Surrey 100 - this is a 100-mile ride, billed as the "largest charity fundraising cycle event in the world", but still not big enough - limited to 20,000 riders and massively oversubscribed.

There's also a pro road race along the London-Surrey 100 course, and some criterium racing.

You could say that anything that raises the profile of cycling is a good thing. To Cycalogical, it seems like a bit of a missed opportunity. The London-Surrey 100 is going to result in the closure of Tower Bridge, Southwark Bridge, Westminster Bridge, Lambeth Bridge and Vauxhall Bridge, Chelsea Bridge, Albert Bridge, Putney Bridge, Chiswick Bridge, Kingston Bridge and Hampton Court Bridge.

That's a lot of bridges, and a lot of disruption. There are some spoilsport myopic car-dwellers who will moan that cyclists are getting everything for nothing, considering they don't pay any road tax (whatever that is). The irony is that to take part in the London-Surrey 100, you do have to pony up £50 or so, which is a lot more than a day's congestion charge and more than a year's road tax for quite a lot of modern vehicles.

If you're not one of the lucky, £50-poorer cyclists, but still want to ride your bike, then tough luck. It looks like you won't be allowed on the London-Surrey 100 course, and you may well be affected by the knock-on effects of the road/bridge closures. If you want to go up to the Freecycle event on the previous day, it will be the same story as previous years - once you get out of the cordoned-off central London section, you're back into the crap, hostile London environment that delivers the worst air quality of any European capital and one of the lowest cycling modal shares. There's been no attempt to provide any road closures or any kind of traffic-limited environment to get there and back. And once you're in central London, the route is about the same length as it was for previous Skyrides, which proved inadequate for the numbers who actually turn up, resulting in a very slow-moving queue.

RideLondon seems to be delivering a lot of the disruption of a traffic-free day, but with none of the advantages. One of the Mayor's cycling champion Andrew Gilligan's main complaints is that cycling needs to be broadened out of it's MAMIL/young-fit-men niche, yet what the London-Surrey 100 is doing is the precise opposite. If we're going to close a lot of London's road system for a day, let's do a proper job and give ordinary people a taste of liveable streets. Let them hear birdsong, experience tranquility, sniff clean air and perhaps even pootle around slowly on a bike.

And what about the other 363 days of the year? It makes no sense to pull out all the stops for one rather exclusive annual event that encourages cycling, yet presents cyclists in their daily lives with an environment that makes them feel as out-of-place as a British woman in the second week of Wimbledon.