Burghley Road Ballsup - How Not to Do Traffic Calming

Burghley Road in the affluent Wimbledon Common area of Merton is usually a quiet road. There is some through traffic but generally speaking it's as quiet as most of the surrounding streets, which is pretty quiet. It's usually a nice peaceful neighborhood in which to ride your bike. However, word has it that at school run rush hour time, it gets a lot busier with local parents dropping their straw-boater-clad Jocastas and Ptolemys off at the local prep schools. Some drivers are a little, shall we say, enthusiastic, with the 85th centile average speed at a scarcely-credible 39MPH.

So Merton have put in some pinch-points to try to restrict "excessive traffic speeds and safety". 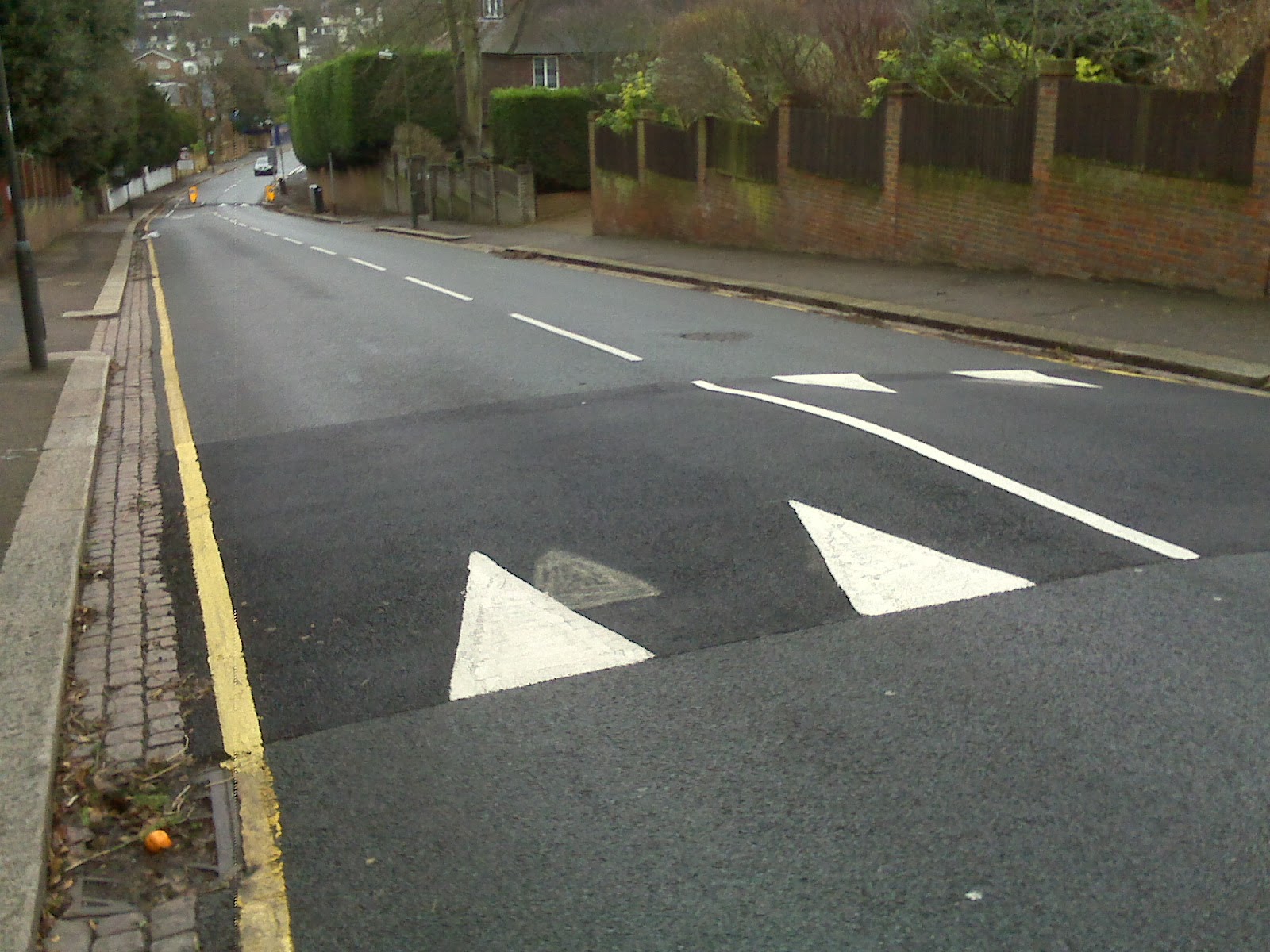 At the top of the hill at the Wimbledon Common end, there is a reasonably well-constructed sinusoidal road hump. This is a good, cycle-friendly start. The road slopes downhill with a considerable although not Alpine gradient. 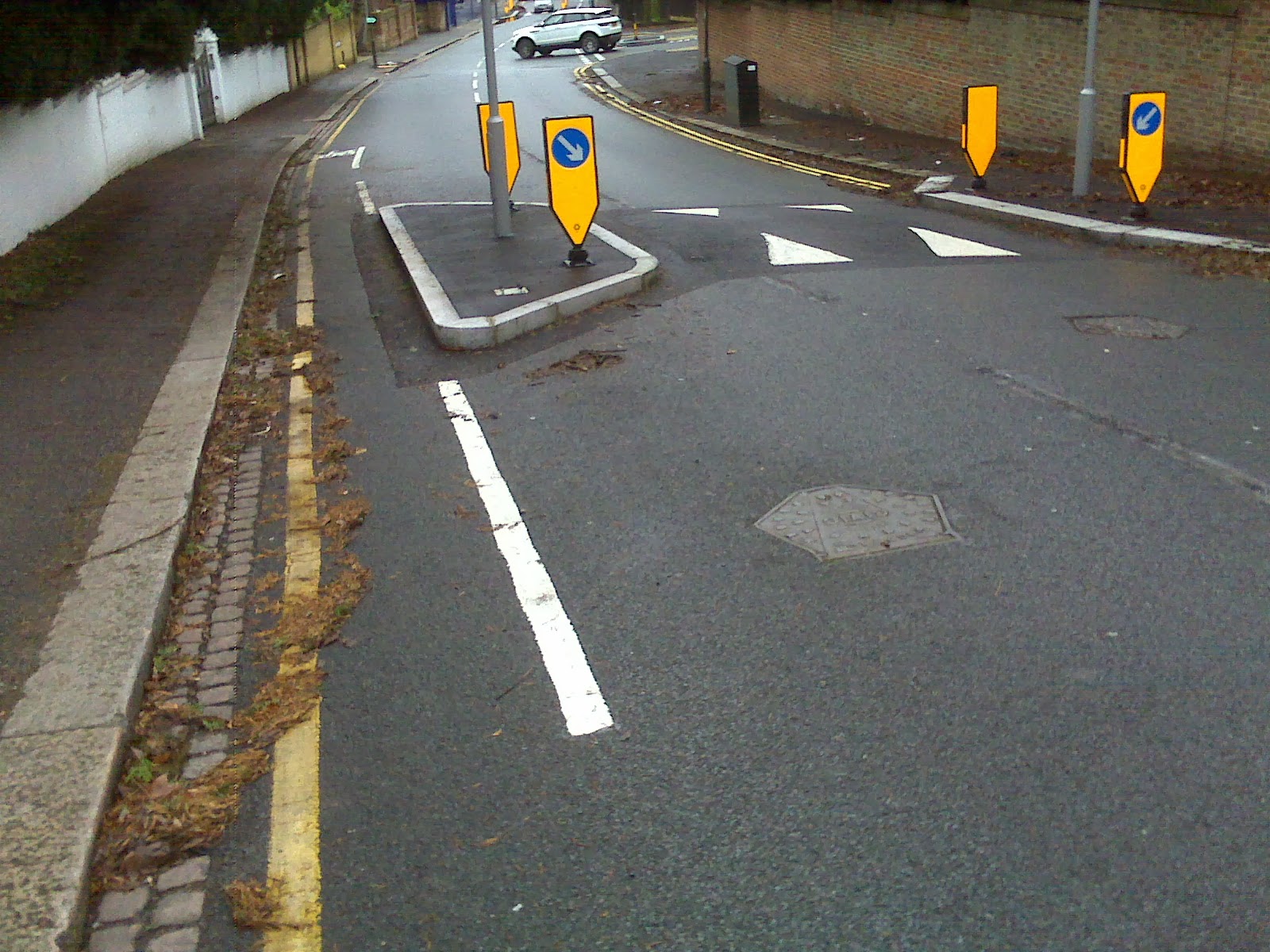 Above: Near the bottom of the hill, there is a pinch-point with a cycle bypass. Motor traffic must give way to oncoming traffic approaching the camera's viewpoint. Nothing too much wrong with this at first glance, you might think. Now look closer at that cycle bypass. 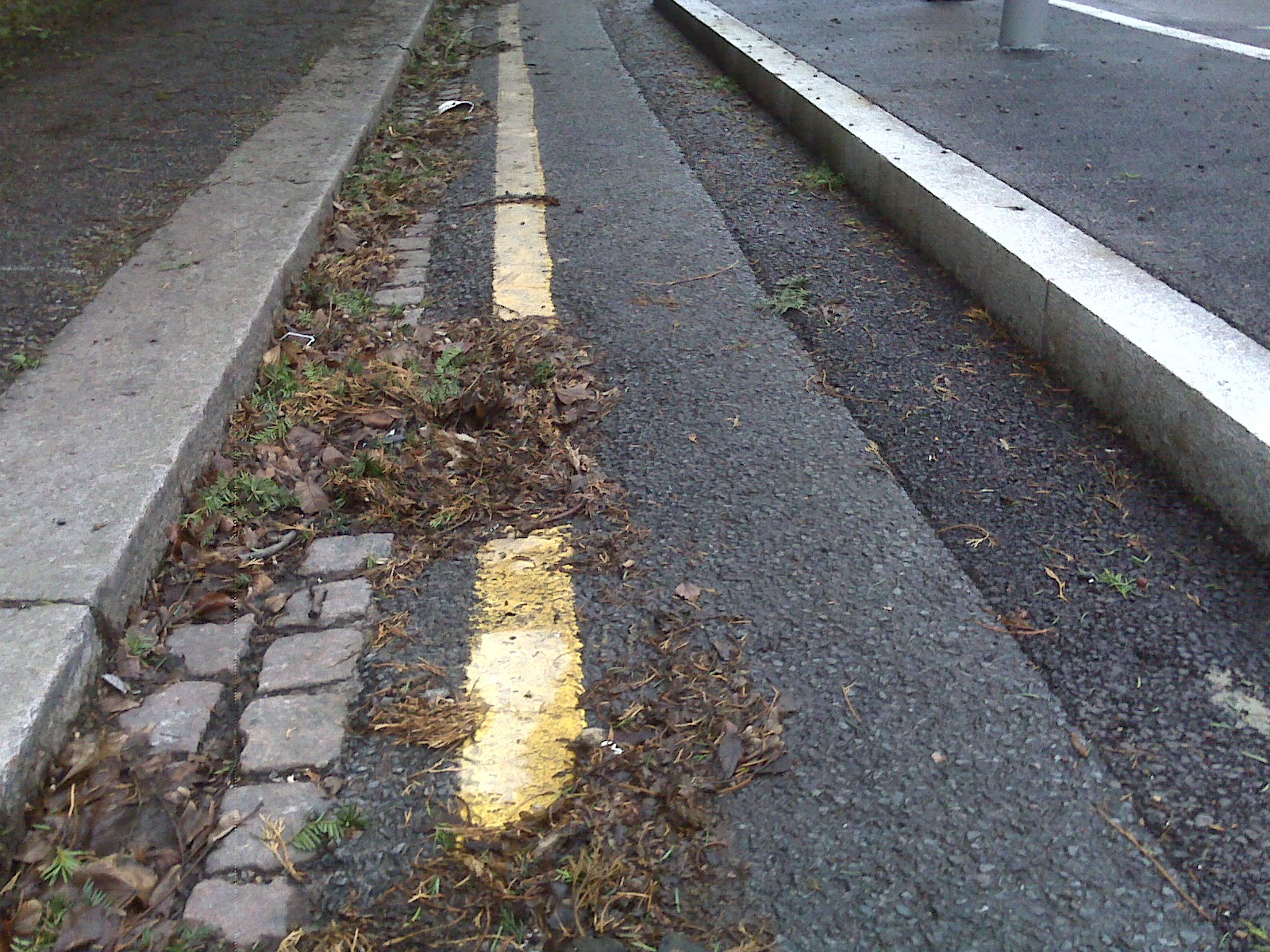 You'll notice that it's already starting to accumulate a lot of debris, but let's look even closer and see what's under that particularly dense accumulation of crud: 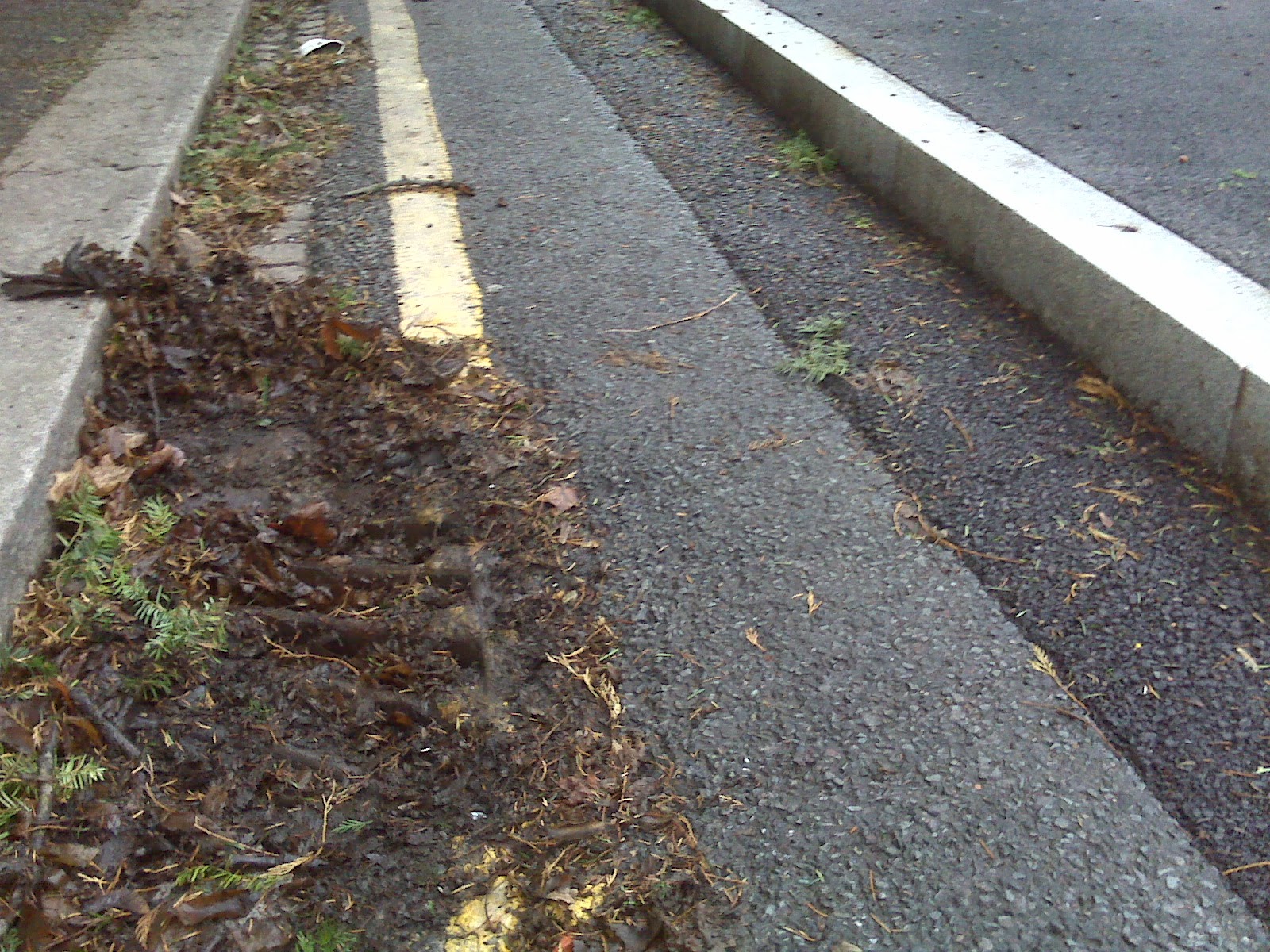 Yes, it's a cast-iron rainwater drain, the kind that will throw you off if you ride over it with your front brake on in the wet. And your brakes will almost certainly be on, given that you've just come down a steep hill. What is less obvious from the picture is that at the edge of the drain is a fairly wide groove that could also play havoc. So the safe area to the right of the drain is only about 2 1/2 feet (750mm) wide. The separating island by contrast is a generous 6 feet (2m) or so. There's also a significant camber in the narrow cycle lane to complicate the rider's life still further. 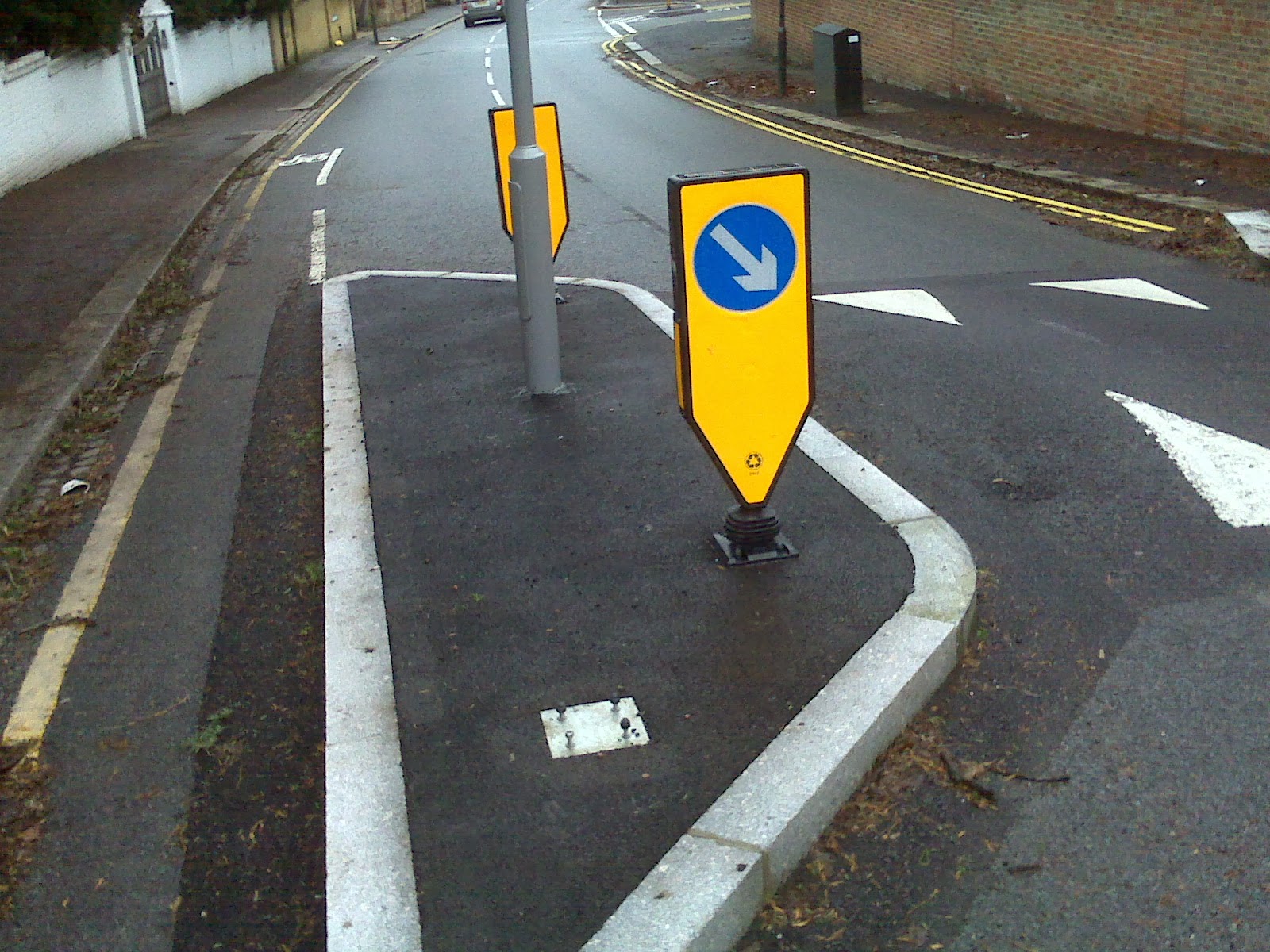 This arrangement has introduced another potentially lethal hazard. Above you see the end of the cycle lane and on the right, the junction with Calonne Road. If you're planning to turn right into Calonne Road, the site of the pinch point (whether the camera is positioned) is about where you'd be signalling and moving into the centre of the lane to position yourself to make the turn. Which, by the way, is a tricky manoeuvre, because of the adverse camber: take it too fast in the wet and you could end up unstuck. But anyway, because the pinch point forces you left at exactly the wrong point, you now have to signal, do a rear observation, slow down and position right, all in a distance that really doesn't allow for it. The alternative of course is to take the lane early, exactly at the point where motorists will be expecting you to take the cycle lane, which puts you at risk of a rear hit from a yummy mummy in a Range Rover. There's a lot of them round here.

Now onto the final hazard. 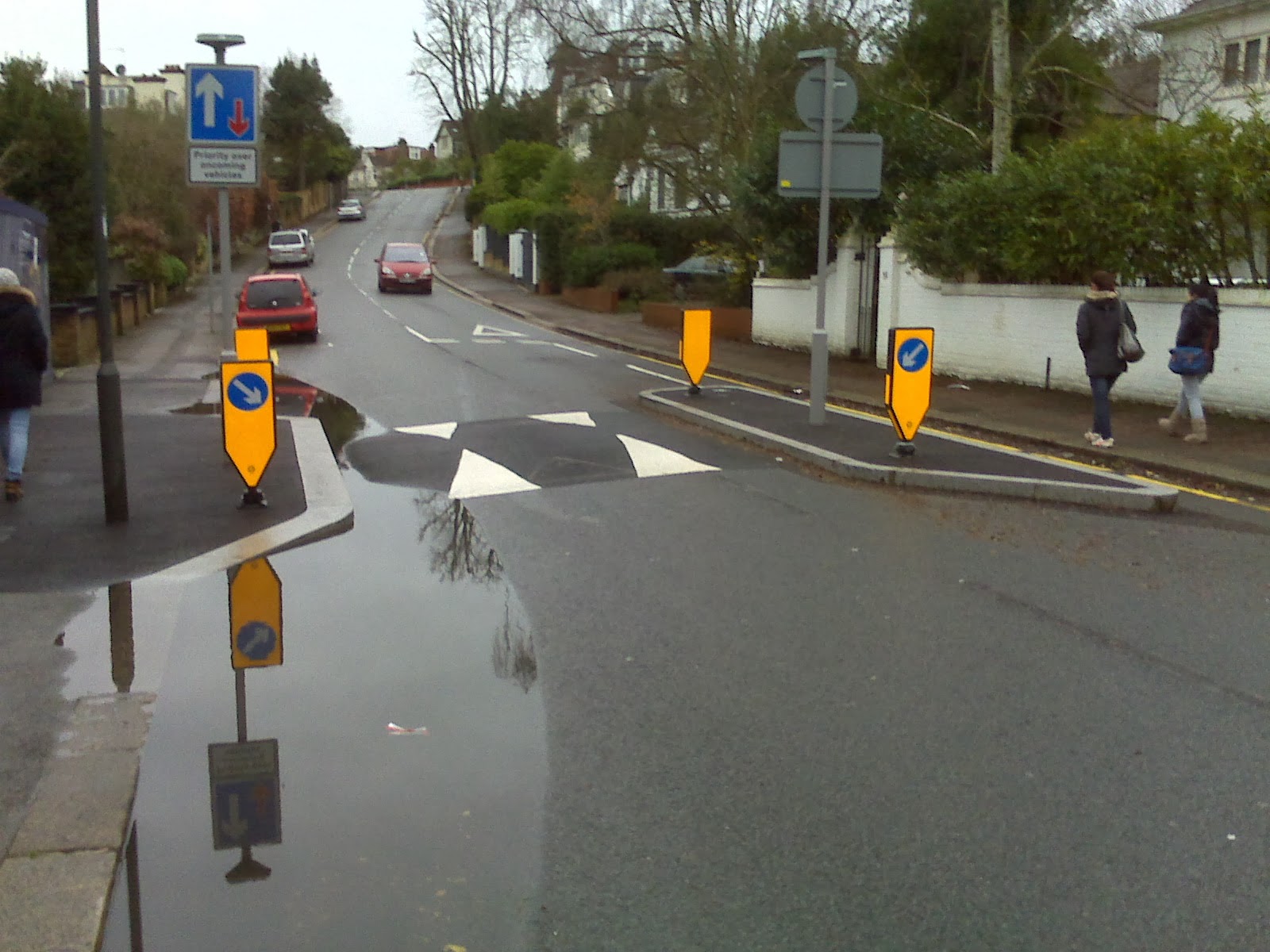 Ignore the pool of water, that's not relevant. Look instead at the buildout of the left pavement, which narrows the pinch point to a width making it impossible for a car to safely pass a cyclist. But of course that won't stop some drivers from trying. And that is exactly what happened when I was taking these photos. A motorist in a large BMW SUV approached two cyclists from behind just as they entered the pinch-point. Luckily one of them had the presence of mind to take the lane in time, forcing the driver to brake, and probably avoiding a dangerously-close pass. While many drivers will react to the traffic calming in the way the designers intended, there is a small but significant number who won't be able to cope with the combination of road humps, give-ways and their own impatience, and will simply put their foot down to try to beat an oncoming driver to the pinch-point, then realize (too late) that there's a road hump in the middle of it and brake unexpectedly. And cyclists are by design forced into conflict with this kind of driver.

So, once again in Merton we have engineers who have spent a lot of money trying to control motor traffic, but because of their lack of understanding of the dynamics of cycling, they've unwittingly created new hazards for cyclists. It doesn't fill you with confidence in Merton's competence to create a Mini-Holland, should the borough win funding for their bid.