Messing Around in Morden

What have TfL done for cycling lately?

First some good news. The plans for the CSH#2 extension from Bow to Stratford looks quite Dutch, with a large amount of segregation, provided by removing one general traffic lane - unthinkable even a year ago. It's a shame that the route isn't fully segregated, because without a uniform level of quality, women, children, older people, in fact anyone without sideburns and an Olympic medal will still be avoiding cycling. And of course meeting the existing CSH#2 will be a rude awakening.

Meanwhile in Merton there's been a bit of work done by TfL on the A24 coming into Morden from North Cheam direction. Previously, this stretch of road was a typical of TfL's treatment of cyclists as an afterthought, with narrow advisory lanes. 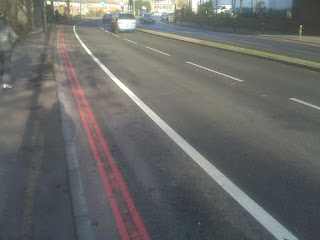 Above you can see the new lane heading toward Morden. It's mandatory and wider than the old lane, and you can see the general traffic lane markings have been moved right a bit. 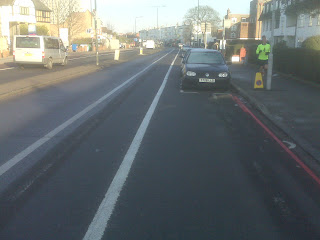 Above you see the opposite side of the road heading out of Morden. The lane is mandatory but it runs on the outside of parking bays, which is a mistake. If you ride anywhere but the right-hand side of the lane, you'll be vulnerable to dooring. The lane should be inside the parking bays. 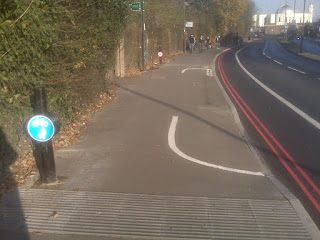 Above: Classic comedy cycle lane. This gives access to the track across Morden Park, the entrance to which is just on the left of the picture. It's usable if you're coming off the northbound cycle lane on the right of the picture, but if you're just trying to get from Morden Park to the swimming pool or Morden College, which are just a few yards behind the camera, you'll have to get off and walk. That's sheer stupidity. For some reason, TfL have decided that the 10 yards of pavement beyond the 'shared use' sign are suitable for cycling, but the 10 yards before it are not. 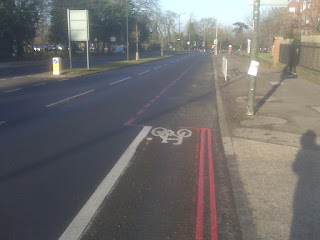 On the other side of the road, heading south outside Morden Primary School, things get worse. Two general traffic lanes and parking bays are a really intimidating prospect. It's not clear what the point of these parking bays is, but when they're occupied only one traffic lane is usable, so this arrangement is pointless. Again, the parking bays should be outside the cycle lane. This isn't rocket science. 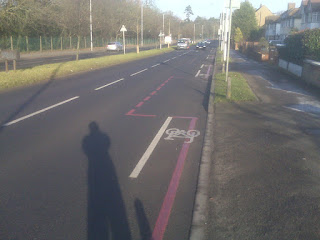 Above: the southbound carriageway between Green Lane and Sutton Common Road. This stretch of road hasn't been re-engineered. This has to be the most pointless cycle lane in London, if not in Britain. When the parking bays are occupied you would have to be suicidal to use it. The lane is interrupted by parking bays every few yards. Whoever designed this needs their head examined. 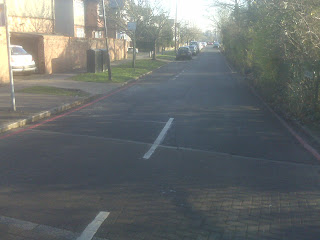 Above you can see one of the side roads. The parking bays could be relocated here. Or alternatively, a cycle lane could be run inside of the existing parking bays...there are plenty of options here. And bear in mind having two general traffic lanes is unnecessary for traffic flow, because the lanes merge into one at Lower Morden Lane (see below). 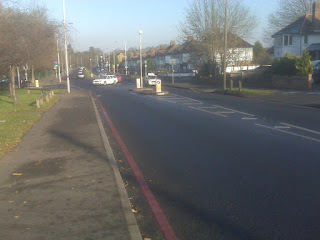 You'll also notice there's a pedestrian refuge providing a dangerous pinch-point. Here's a picture illustrating how narrow it is: 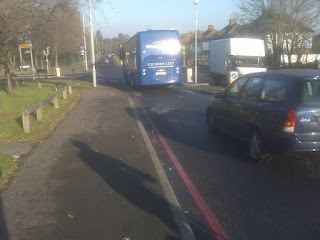 So, if you're lucky enough to live in Newham, and don't need to ride more than about 3 miles, you can look forward to a pleasant experience on the CSH#2 extension in the next year or so. In most of the rest of London, what you see in the pictures above is pretty representative of the kind of crap you'll have to put up with for many years to come. The depressing thing is that TfL have actually improved part of this route, which might give you a clue how bad it was before. TfL say this is just an interim scheme. Interim schemes are a waste of money, because you end up with two sets of design, implementation and project costs, plus the interim scheme doesn't deliver much benefit. Really TfL need to stop messing around with paint and only do Dutch things from now on, because that is the only approach that gives value for money. Schemes like this one won't attract new cyclists, so the cost per cycle journey is actually very high compared with a segregated design, simply because the segregated design will attract a lot more more cyclists even though the engineering costs are higher.