How Westminster is Anti-Business 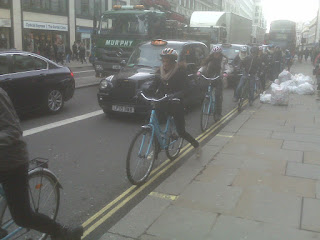 Here's a bunch of tourists who have rented bikes for the day.

I bet they thought they'd have a relaxing ride around and see the sights.

Instead, they are wobbling along, stuck in traffic with taxis, buses, HGVs, vans and cars. In short, the typical crap experience that Londoners know and avoid.

The streets of London should be an asset, enabling people to get around and enjoy the experience. Instead, they are a liability. Far too many people in taxis and private cars clogging up the roads and ruining the experience for everyone. And it's not just the main routes like the Strand (above); Westminster's stubborn insistence that motor vehicles dominate almost every single street in central London is costing the capital dear, by presenting visitors and residents alike with a grim and uninviting street scene that is hardly the welcome that businesses dependent on tourism want.
at 4:59 AM 2 comments:

The BBC uncritically re-reports PWC's assessment that "Shale oil production could boost the world economy by up to $2.7tn (£1.7tn) by 2035".

Unfortunately, sucking more oil and gas out of the ground and burning it has some well-documented negative consequences for the world economy, in the form of climate change.

Consider that Hurricane Sandy is estimated to have resulted in $75bn worth of property damage. And that is without considering the human cost.

If we don't throttle back our fossil-fuel use, we can look forward to many more Sandys. That, by the way, is fact, unless you are of the philosophical position that facts don't actually exist. No scientific body of national or international standing maintains a formal opinion dissenting from any of the main conclusions of the IPCC on global warming. The relatives of the 285 people who lost their lives in Sandy would be able to sue someone if their deaths were a result of recklessness or negligence, but because the effects of burning fossil fuels are completely externalized, they can't. Our grandchildren won't be able to sue the shale oil industry or anyone else for the state in which they leave the planet.

Sandy was just one extreme weather event in one country in one year. In 2012, we can also count, among many others, droughts in the US, record temperatures leading to bush fires in Australia, a super-typhoon in Indonesia that killed over 1000 people and destroyed or damaged over 200,000 homes, and the wettest year in England on record. While we can't attribute every extreme weather event to climate change, a rising number of these events is exactly what the science predicts.

The serious danger is that shale oil, far from boosting the economy, will actually deal it a serious blow once the effects of an increased frequency and severity of extreme weather events attributable to climate change is factored in.
at 1:27 AM No comments:

Bike North Birmingham is one of the schemes funded by the Local Sustainable Transport Fund (LSTF).

You may remember that one of the Coalition's first 'achievements' was to get rid of all the various different pots of money that local authorities had to compete for, and merge all the money for transport schemes that didn't involve promoting private car use into one fund.

This blog pointed out at the time the LSTF was announced its obvious flaws. You can dress pretty much any scheme up as 'sustainable', and most local authorities simply don't understand or care about cycling. Local councillors get elected on issues like parking and dogsh*t. Cycling doesn't even register on their radar, politically speaking, for the most part. So the idea that you could leave councils to choose how much money to spend on cycling could only have one outcome - less money spent on cycling. Couldn't it?


We've previously taken a look at the Slough LSTF scheme, and that pretty much proves the point. Virtually no spending on cycle infrastructure, and no new high-quality routes created. Instead, it included SCOOT traffic signals, which I described as follows:

"The only purpose of SCOOT is to push more motor traffic through junctions, so how that counts as 'sustainable' I don't know. We know from experience that if you increase capacity for motor vehicles, more motor vehicle journeys will result, as sure as night follows day."

However, Slough was a mixed scheme, not a cycling scheme. So let's take a look at 'Bike North Birmingham'. The clue is in the name - it is entirely about cycling. But of course that doesn't mean bike use in the Brum is going to skyrocket - it all depends if they take on board the lessons that our Continental cousins have learned i.e. you need subjectively safe routes where cyclists are not expected to duel with significant volumes of high-speed traffic.

You can take a look at the plans here. The scheme consists of 9 routes, partly off road through parks, but partly on-road. They're colour coded, by someone who clearly like purple, because there are violet, purple and magenta routes alongside more prosaic shades.

Let's look at the Violet Route, which is described as follows:
• 5 kms long connecting Walmley Village to Chester Road
• Link passes Wylde Green Rail Station
• Local links to Bishop Walsh Catholic School and Walmley Village
• Link will be both on and off-road, on road sections are to be advisory through residential streets
• A Toucan crossing upgrade at the junction of Chester Road/Church Road

Note the phrase I've italicised: on road sections are to be advisory through residential streets. Unless I miss my guess, that sounds like there won't be any segregation, and there's nothing to suggest that there will be any traffic reduction, mandatory lanes, moving of parking bays, traffic calming, filtered permeability, 20MPH limits, or anything at all to make the streets more cycle-friendly than they are today.


Above you can see two sections of the route near Wylde Green Station: Sycamore Road and Sunnybank Road. Looks pleasant enough, doesn't it? You'll notice the cars park on the pavement: that's usually because there's significant traffic moving at significant speed, and people get their cars scraped when speeding drivers try to get through narrow gaps. Between the two locations pictured above, there are two half-kilometre sections along Church Road and New Church Road, which are dead straight and have no traffic calming. Still liking it? Now, it could be that the drivers of North Birmingham are all considerate of cyclists, don't use roads like these as rat-runs, are never in a hurry, and don't use mobile phones. Somehow, I doubt that, not because I have a low opinion of the residents of the second city, but because there's no reason to expect they are any different to people anywhere else in the UK.

Now, you need to ask yourself a question. If roads like this can be made into cycle routes as if by magic, without actually doing anything about the hazards, why do only a miserable 0.9% of Brummies get to work by bike currently? To get a figure that low in a major conurbation takes real dedication.


Bike North Birmingham is a well-intentioned attempt to get more people on bikes. It isn't a cash-grab like Slough's that dresses up a car-centric scheme as 'green' to get 'sustainable' funding. Yet it still doesn't appear to hit the mark. That is because local authorities simply aren't empowered to do cycling schemes that actually work. We need schemes like this to be built up to a standard. Routes need to be continuous with a minimum level of subjective safety, and that must mean some restrictions on car use are necessary if we're going to have on-road routes. But because councils today are free to do what they like, usually guided by engineers who, according to Mike Wilson from the Highway Agency "haven't been trained to focus on cyclists and pedestrians" , we end up with relatively expensive schemes (£6M in this case) that will produce very little, once the Bike-It officers have left and the publicity has been forgotten. Sure, a few people will start cycling, and a good few of these will experience a close pass or two and put their bike back in the shed for good. I doubt we'll see many 8-year olds cycling to school however, except on the pavements - if they can squeeze past the cars parked on them, that is.

I would love to be proved wrong on this, I really would, and I invite anyone who knows this area well to call 'bullsh*t' on my analysis. But I've seen too many schemes that look a lot like this one all over the country, all based on good intentions, and not worth a hill o' beans.
at 3:52 AM 1 comment: