As autumn gave way to winter, the cycle path between North Road and Plough Lane became carpeted in a golden mantle of fallen leaves. Then, the fallen leaves gradually became a slippery brown slush, which has persisted until spring. When you're on a bike at any speed, wet leaves are a considerable danger.

Fair enough, I thought, Merton Council clearly have better things to spend their money on than clearing leaves. 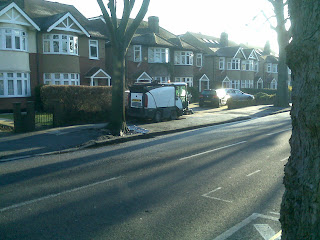 Not true, it turns out. I spotted this pavement-sweeper (above) on Dorset Road in March this year. The council go to considerable lengths to clear the leaves from Dorset Road, which is fair enough in Autumn, but in March it's pretty clear of, well, anything at all in the way of foreign matter.

So how come the cycle paths are apparently NEVER cleared, despite the obvious safety hazard, when Dorset Road is subject to a stricter cleaing regime than a lot of hospitals?
at 11:09 AM