A new group called Bikes Alive organized a protest at Kings Cross last night. The protest was relatively small, but very effective in bringing the junction to a halt, and causing what TfL would call 'considerable queueing' in the roads feeding into the junction. There were a number of police on cycles present, and the atmosphere was fairly orderly based on what I witnessed. I saw a taxi driver driving so close to one of the riders at the back of the bunch I thought there would be a (very low-speed) collision, but there wasn't, and there was a free and frank exchange of views between one protester and a police officer when the police tried to shoo the group forward. 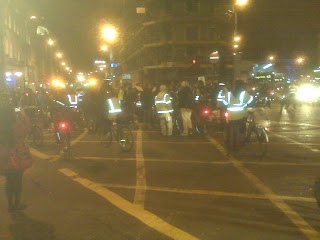 Does this kind of thing work? Well, it's more effective than sitting at home watching the telly, and it's got some news coverage. And the group is planning repeats of the event. One perspective is that TfL claim the junction has to be the way it is to ensure traffic flow. If the junction is regularly blocked by protests, that won't be working too well, and it's difficult to see how the Mayor won't suffer politically.