Another relatively quiet day on the central London roads in this morning's rush hour. The Standard yesterday was reporting congestion at the A40 Hanger Lane, the A13 Canning Town and the A12 Green Man, but everyone I've spoken to has said that traffic on their routes was quieter than usual.

I took a slightly different route in today.

Lambeth Bridge roundabout (South side) was busy, but no more than usual and traffic was moving. 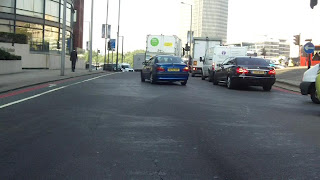 On Lambeth Bridge itself there were queues, but certainly no worse than a normal weekday. 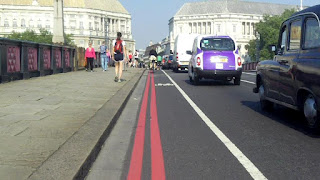 Outside Parliament, traffic was very light - not a single motor vehicle in this picture: 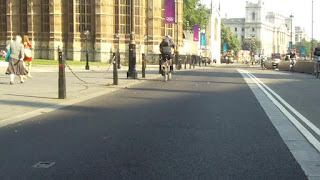 Parliament Square was like yesterday, far quieter than usual, and once round it you see that Whitehall is closed to motor vehicles other than buses and there's a gentleman whose job it is to tell non-Games drivers to clear off: 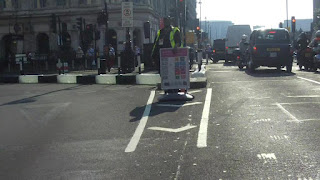 So Whitehall is a pleasure to cycle along (I never thought I'd write those words), with only the odd bus for company: 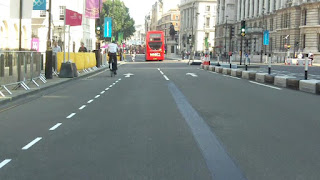 They've messed up the Trafalgar Square end with an unnecessarily narrow lane making it difficult to get to the front of the junction: 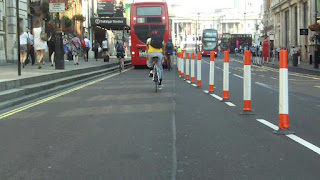 Trafalgar Square itself was quieter than usual, although The Strand westbound was its usual congested self.


In summary, cycling in central London has actually become much more pleasant experience as a result of the road changes brought by the Olympics -  but it is worth pointing out that this entirely by luck rather than design. There has clearly been very little consideration of cyclists gone in to this project - the roads restrictions generally don't have exemptions for cyclists; there's been no attempt to make provision for cycling through St James's Park for example, and the banned turns and no-entry signs don't have cycle bypasses. All of which is at least consistent with the general lack of any attempt to encourage cycling that's the hallmark of the London Games, as Vole O'Speed documents.

So enjoy central London while you can. It'll be back to the same old crap come September.
at 2:51 AM