Yes, another story in my Lambeth Fail series. Sorry to other London boroughs for favouring Lambeth again, you'll just have to try less hard.

Now, you really couldn't make this one up. Up until recently, the contraflow lane on Vauxhall St (which is one of the few examples in London of that critically endangered species, the segregated cycle facility) was blocked along with the pavement, and there was a "pedestrians please use other footpath" sign.

At that time, my fearless and redoubtable fellow-blogger Charlie (Kennington People on Bikes) sent a pic of the blocked lane to Lambeth's cycling officer. who responded thusly:

I have been sent the attached photos of Vauxhall Street. They show that the contraflow cycle lane is completely  fenced off, forcing people on bikes into the narrow lane of oncoming traffic. Not only is it dangerous, especially to children using the route,  it is also inconvenient and increases journey times for people cycling.
Given our road user hierarchy, our approach in this situation should be to maintain the pedestrian and cycle routes and close the road to motor vehicles except for access to the supermarket and estate.
We've been criticised in the past for our lack of consideration of cyclists at roadworks (Akerman Road; Baylis Road; Greyhound Lane) but I thought we had begun to remedy that. There are lots of examples of good practise regarding cycling at roadworks  across London which we could learn from, for example recently on Union Street outside Palestra.
Will you look into this urgently? It is important that we sort it out quickly as the current situation is unacceptable and I expect we will receive many more complaints. 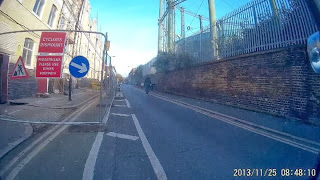 A week later, the lane's still blocked, and - get this - a "cyclists dismount" sign has been added. So, Lambeth's idea of remedying danger and inconvenience to people cycling is...to stop them cycling. Perfect. No doubt soon they'll have a police officer ticketing cyclists having the temerity to ignore the dismount sign and ride around the obstruction.