Westminster Council have been digging up Maiden Lane for months now, and laying very expensive-looking granite setts. Below you can see the state it's been in: 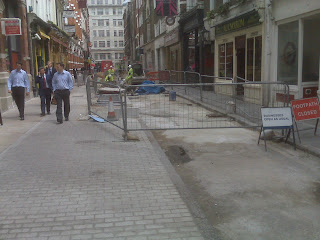 On the plus side, the road's been closed to traffic so it's been more peaceful than usual. So what difference has this makeover achieved? Will we see cafe tables out on that widened pavement? Will the road be closed to through traffic, with just the odd bicycle trundling past? Will it be made 2-way for cycles? 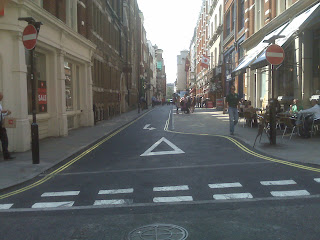 Above you can see the old signage hasn't been changed, so cycling west is still prohibited (although interestingly, there is no one-way signs at the other end, so in theory you could walk your bike past the no-entry sign and then cycle west. However I'm sure this is not what Westminster Council intended). 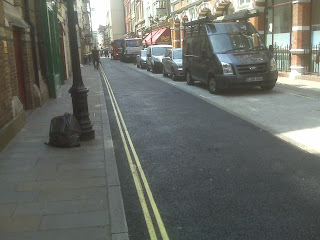 Above you can see that all that incredibly expensive granite sett paving has been used for car parking. So you can't even see where all you're money's gone...except... 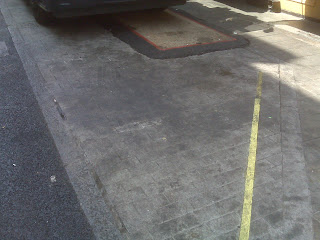 ...someone's spilt something oily on it thus ruining the natural stone appearance and making it look like an East-End car repair shop, and to boot they've put some makeshift access cover, filled around with tarmac, thus making it a total eyesore. 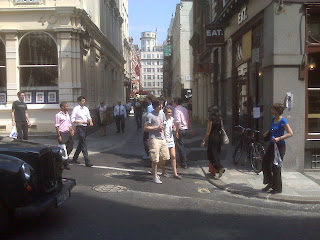 On the plus side, there's not much traffic going down there yet, but that's because the taxis and van drivers haven't discovered that it's been re-opened yet.