I don't think I've ever seen Central London quieter. Even in the middle of the night you get more traffic than I saw today, the first day of operation of the Oympics 'Zil' lanes.

It's quite interesting to see the bizarre treatment given to CSH#8. 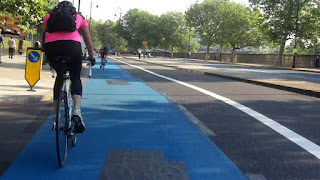 Above you can see they've blacked out all trace of the CSH barring the blue paint along Millbank. Here the lane markings were only advisory, so it was completely unnecessary to remove them. 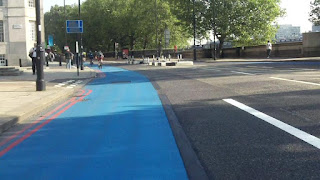 Above, you can see the Games Lane actually comes to an end, but they've still pointlessly blacked out the CSH markings. 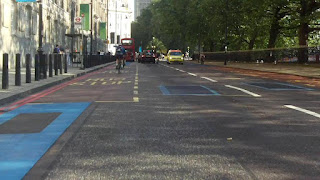 And above, they've even gone as far as to black out the CSH logos in the middle of the road. Presumably so that the 'Games Family' don't have to think about cyclists at all. 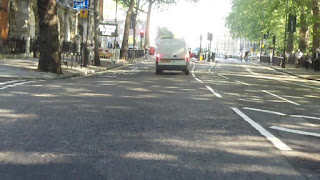 Above, as we go past Victoria Tower Gardens towards Parliament Square, there is 'Bus and Games Lane' stencilled on the carriageway in big letters, but no lane markings, so it's not clear what to do here. However it's on the nearside so bikes would be allowed in it - if it existed. 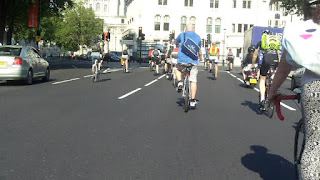 Above: Believe it or not, this is Parliament Square. The bikes dominate the motor traffic for a change. 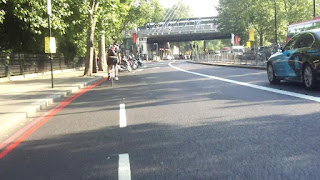 Above, Victoria Embankment. And there's an actual Games car in the Games Lane. Again, this road has never been quieter.

Now, we know that there are a lot of people avoiding driving in Central London because of the Olympics. But if journeys are really necessary, people presumably still have to drive. You can't deliver goods or fix boilers without a van. Maybe some of these essential journeys are being put off, but even allowing for all that, there was still a very small amount of traffic compared to normal, considering we're always being told about the absolute imperative of maximizing traffic flow. Maybe we're being kidded about the number of essential motor journeys in London?