Let's see what they've been up to. A word of warning first: don't get your hopes up. 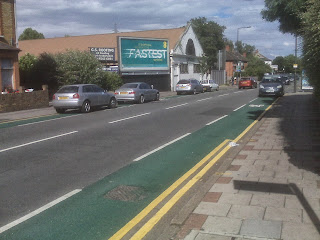 Above, looking east just before the Savacentre, you can see it's not so much cycle lanes as car parking. Why not make the lanes mandatory? Because, as on the CSH7 which starts a little bit further on at Colliers Wood, car parking is deemed more important, so the lanes are only any use for a few hours on weekdays. (Now it is worth pointing out that this is not necessarily all Merton's fault, because this is a TfL route and changes to parking restrictions would be subject to a traffic order and signed off by them. So TfL have some responsibility as do the Coalition for not abolishing this red tape. But ultimately this is Merton's scheme, so in my view the buck stops with them.) 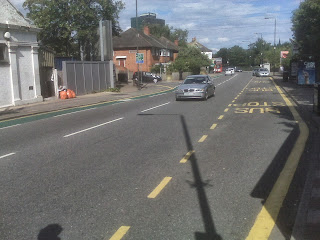 Moving a little further east, just behind the grey car in the first picture there is the bus stop for Savacentre, pictured above. Here, the westbound cycle lane disappears. 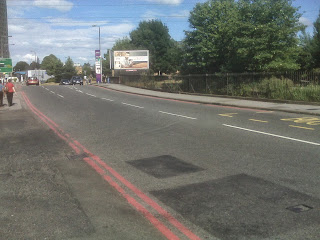 East of the Savacentre, at the approach to the dangerous junction at Colliers Wood, there are no cycle lanes at all in either direction. This is actually where you most need them. 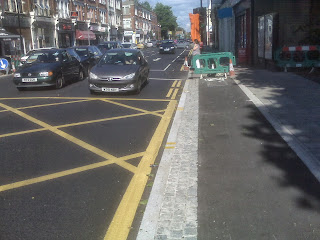 Things improve a little at the Haydons Road junction westbound. Here there is an advisory lane that leads into a lane on the pavement and it seems this will enable you to bypass the lights. This is the highlight in an otherwise pretty useless scheme. 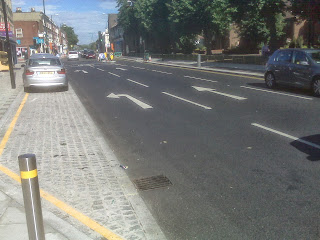 Above, on the eastbound side of the same junction though, there is nothing. The twin traffic lanes are retained, and you'll notice there's a guaranteed left-hook if you stay to the left. There's an ASL but no lead-in lane, which is pretty useless. 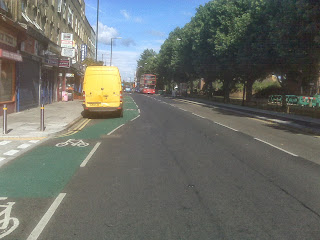 At Nelson Road, you'll need the courage of the great admiral because the cycle lane swerves around some parking spaces, and the lane is right in the dooring zone so you're best advised 'taking the lane', where you'll no doubt get honked at by motorists who can't figure out why you're not in the perfectly good cycle lane paid for by their taxes. 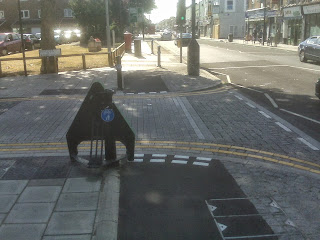 On the other side, at Pincott Road, the pavement lane gives way to a side street: after all, motor traffic is more important so must get priority. 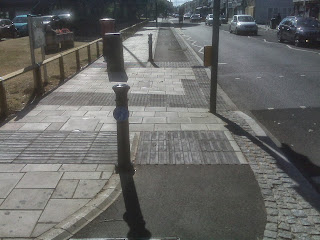 Above, the pavement lane continues past a crossing. You'll notice the pavement is obstructed here by some street furniture so there's potential for conflict with pedestrians. 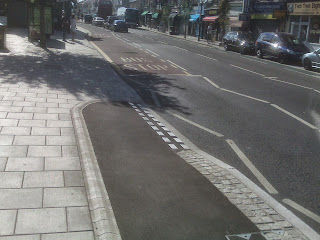 Above, a little further west the pavement lane ends, well before the dangerous South Wimbledon junction, requiring you to merge into two lanes of westbound traffic. This really hasn't been thought through. 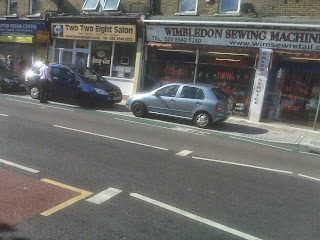 On the opposite side there is a lane, but it is narrow and alongside car parking, so unless you fancy a 'dooring' you're best off in the main carriageway.

So in summary, there is clearly not much joined-up thinking going on at Merton Council. This scatty, ill-conceived scheme might have been par for the course a decade ago, but given that Merton is bidding for the 'Mini Holland' cash, it simply isn't good enough. Narrow, intermittent, part-time advisory lanes right alongside car parking endangers cyclists and does not help them. Segregated paths are great, but not when they give way to side streets and spit you out into fast-moving traffic.
The only thing to be said for this scheme is the lanes do something to help keep space free for cyclists to pass on the left of the congestion which is commonplace on this road. But it won't attract any new cyclists, or do anything to improve the safety of the junctions. So as such this scheme is a waste of money. Money that could instead have been spent on Dutch-style infrastructure that people will actually use. Instead we've got something from the palette of discredited solutions that is out-of-date as soon as it's been built. Something that doesn't speak well of Merton's understanding of cycling and will do it no favours with the judges of the Mini-Holland bids.
at 2:36 PM