Lambeth have finally got around to resurfacing Turret Grove. This residential street has been a patchwork of potholes for some years now, so cyclists will be looking forward to a nice, smooth ride on billard-table-like tarmac.

Unfortunately, they will be disappointed. 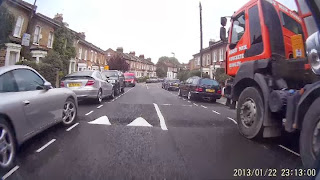 The road surface itself is smooth enough, but they've put new road humps (above) that are even more severe than the ones they replace. They are so upright the effect is like hitting a kerbstone, and the impact at any speed is likely to dislodge your lights, luggage etc.

A cycling-friendly council would have used sinusoidal profile humps, which are effective at limiting motor vehicle speeds but much more comfortable to cycle over.

They also could, and should have taken the opportunity to change the priority at the Rozel Road junction (below). 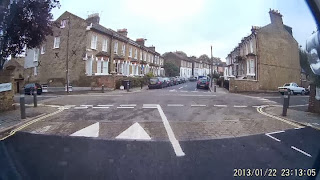 Rozel Road is a very quiet road but as it currently has priority over the cycle route, you have to slow down and be prepared to give way. I can't see any issues with changing the priority to favour the cycle route. 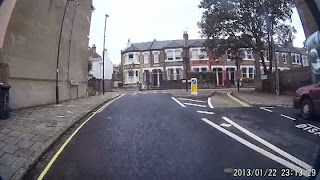 Above: at the junction with Rectory Grove, if you're turning right into Turret Grove (towards the camera) you have to execute a very sharp right turn to go left of the island into the narrow cycle bypass. This is dangerous because you have to slow down, risking a rear hit as the sight lines at this point are poor. The logical thing to do would be to remove the island. But they didn't

You might remember back in June there was a lot of noise about Lambeth's new Cycling Strategy. In it, they claim: "Work has already been done to change the formula for road resurfacing to give extra priority to roads used by cyclists." That is welcome, but what's happened here is they've resurfaced the road but, almost unbelievably, actually made it worse for cyclists.

So what went wrong? It looks like Lambeth is still a typical council, where cycling is the responsibility of (if you're lucky) one or two under-resourced individuals very low down the slippery pole of the management hierarchy. For everyone else in Highways, cycling is an unwelcome distraction from the day job of getting proper motorized vehicles moving efficiently. Cycling is only something considered on the rare occasions when there's a "Cycle Scheme"; at all other times (road resurfacing, new parking spaces etc.) it's ignored.

If Lambeth councillors are serious about putting the warm and encouraging words in their Cycling Strategy into action, they have got to make cycling a responsibility of every officer in Transport and Streets.
at 2:09 PM