Here's the scene on Millbank, between Vauxhall Bridge and Lambeth Bridge, just after Tate Britain: 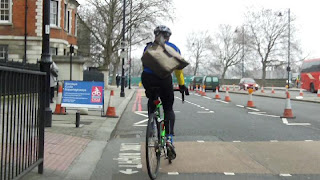 As you can see there are some CSH-related works going on in the centre of the road. 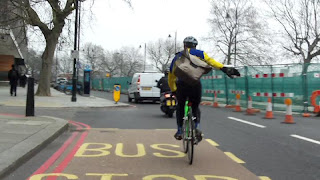 Then,just before the Millbank Cinema, (above) the pavement's been built out to accomodate a cycle hire docking station. This combined with the roadworks has provided a very dangerous pinch point. As is typical of TfL, they don't consider the effect roadworks have on anyone's safety, which is ironic given the Cycle Superhighways are supposed to be improving safety. 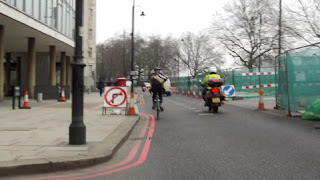 Above: the works continue until the junction with Thorney St.

What's going on here? According to the implementation schedule:

I have to say there wasn't much wrong with this road to start with. The central reservation all along here was narrow to start with so my guess based on what I saw is it's the reservation is being widened. Digging up the central reservation is a very expensive way to solve a problem that could be fixed with a hatched area. What would have made a lot more sense along here would be to put a segregated 2-way path on the south side of the road. There's enough road width, and because it's next to the river, there is no problem with junctions. There's not much pedestrian traffic at peak times either. It would have created a nice leisure route where people could cycle along the riverside. Now, you could argue that blue lanes are cheap. They're not if you start digging up the road for no good reason. That money would have been better spent sorting out the safety issues around Macduff Road that I blogged about earlier this week. This project is starting to look like it's designed by people who don't understand cycling and have little idea of cost control.

Segregated lanes may cost more to put in than painting the existing highway, but if you look at the long-term cost per user, bearing in mind segregated lanes will attract more cyclists, and factor in the economic benefits (reduced congestion, reduced pollution, healthier workforce), segregated lanes work out cheaper.
at 5:03 AM