There's a gas leak under Trafalgar Square roundabout, so the gas company are digging it up, closing a couple of lanes on the northern side. (below) 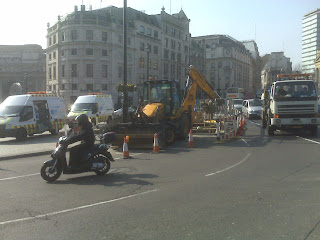 This place is a bottleneck at the best of times, so you can imagine what effect it had. I went past on Monday lunchtime, and the traffic was completely gridlocked. I'd never seen it this bad. The police were attending, but were unable to do anything.

By the evening, traffic was moving again, because they'd closed the approach from The Mall and diverted traffic.

Tuesday, The Mall approach to the roundabout was still closed but the traffic was being diverted down Horse Guards Road (see below). 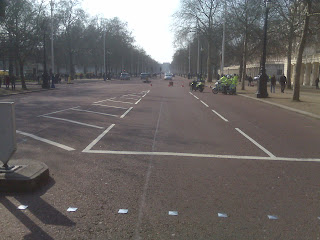 Below is the scene on The Strand on Tuesday: 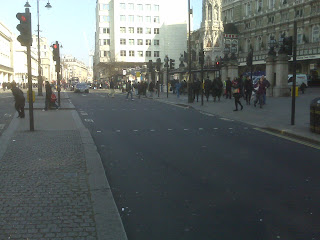 On a normal weekday, there would be a long tailback. You'll notice in the picture above, The Mall did not appear to be suffering from congestion, Embankment seemed to be OK as well. In fact I didn't see any ill-effects.

So what happened to all those essential motor journeys?

**UPDATE**
At lunchtime today (9/3/11) the same situation persisted: still the roadworks and still the diversion off The Mall into Horse Guards Road. There was a small tailback along Horse Guards Road of 300m or so, and a small tailback along Birdcage Walk. Traffic at Buckingham Palace was moving freely, as was Hyde Park Corner. Picadilly was tailing back almost to Hyde Park Corner, but then it usually is. Parliament Square was busy (as usual) but moving; Whitehall was very busy but clearly not gridlocking Parliament Square.  Embankment easbound was if anything quieter than normal.

Can we come to the conclusion that this diversion has not made the traffic any worse in central London? It's certainly improved things around Trafalgar Square and along The Strand. If you were actually trying to get to Trafalgar Square from Buckingham Palace, your journey would be slower. Whether there were any serious effects further away is impossible to say.
at 2:52 AM