We don't normally endorse commercial operations on this blog, but I'm making an exception for The Harp, CAMRA Pub of the Year 2010/2011.

Unfortunately, The Harp is rather a small establishment, and due to its deserved popularity the punters spill out onto the pavement of an evening. Even more unfortunately, the pavement is very narrow, so the punters spill out onto the road. The Harp seems to have employed a very polite lady whose job it is to shoo the punters back onto the pavement. This is only necessary because the road is a taxi rat-run. Like virtually every road in central London, there are no restrictions on motor traffic. When I was at The Harp the other evening, it's fair to say that the taxi drivers were in general not driving dangerously or in an intimidating manner (the most intimidating behaviour I saw was a Jaguar driver who scattered a few crossing pedestrians who had right of way), but the constant presence of motor traffic is not exactly conducive to enjoying a relaxing drink. The Harp is, by its Pub of the Year award, the most successful business of its kind in London. So why is such a successful business not entitled to use the public space outside for the benefit of its many customers, when the relatively few taxi drivers, who take up an inordinate amount of roadspace and who could use an alternative route, are entitled to curtail The Harp's business? 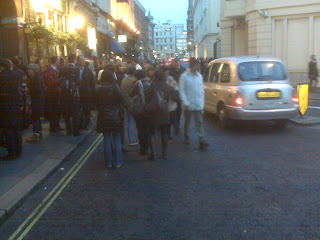 I'm not suggesting for a moment that all London roads should be closed for the benefit of businesses. I am suggesting however that the ubiquitous presence of motor traffic on every single central London road (with a very few exceptions) is detracting from some of London's most successful businesses, and from London's status as a tourist destination. Maybe we'd be a more successful city with less traffic.
at 2:51 PM