Dorset Road is a pleasant, wide residential road in the heart of the Merton Park area of Wimbledon. It is lined with magnificent mature plane trees on either side. It forms part of the local cycle network. Children can cycle safely along it on their way to Rutlish and Merton Park Primary schools, along the well-maintained, segregated cycle path.


Instead of a cycle path, there is, well, nothing. In fact, it's rather worse than nothing. There is a 20 MPH speed limit, but the 'speed cushions' do nothing to calm vehicle speeds, and the road is a well-known rat-run that the council have done nothing about.

As you can see below, the road width and lack of proper speed humps and parked cars just shouts 'put your foot down!' to rat-runners: 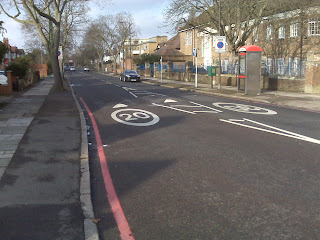 Once up to speed, motorists tend to align their vehicles between the speed cushions for the most comfortable ride. The result is that in a gap between parked cars with a nearby speed cushion such as the one below, you can expect cars coming towards you in the middle of the road, rather than on the correct, safe line: 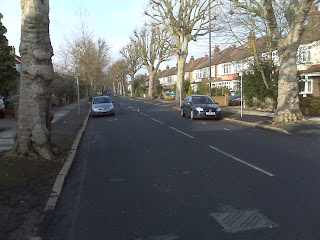 For cyclists, the cut-through speed cushions offer pretty much the worst of all possible worlds:

1. They do little to reduce speed of motor traffic.
2. They tend to funnel all traffic into a certain corridor in the road.
3. They focus the driver's (and also the cyclist's) attention on what line (s)he has to take to avoid the speed cushions, rather than what is the safest line, and distracts their attention from other road users and pedestrians.
4. They tend to force the cyclist into the cut-through, where they are more likely to come into conflict with other traffic.
5. The cut-throughs are not a safe distance from parked cars. In other words, in taking a path into the cut-through, you are at risk of getting 'doored' or hitting a pedestrian stepping out from behind a car or van.
6. They are dangerous, particularly in the wet. If you strike the corner or side of the hump at the wrong angle, this can cause a wobble or a skid. In other words, if you initially take a line into a cut-through, but are forced by oncoming traffic to alter your line , the steep sides of the hump present a hazard.

So why is the council not making Dorset Road a safe, pleasant place to walk and cycle? Because they are too busy 'de-cluttering'. Of course, they won't be removing advertising hoardings or parking spaces, because they're not 'clutter'.

So Dorset Road will remain a cycle route that you wouldn't want to cycle.
at 6:08 AM