Cycling from Wimbledon to Raynes Park, the cycle route is a very mixed bag. From the town centre, you can follow the back roads down to Merton Hall Road, and from there a pleasant off-road section awaits with a segregated cycle path. This then emerges at Kingston Road at the junction with Lower Downs Road. This is where the problems start.
There is a cycle lane on either side of Kingston Road, but it is advisory only and fairly narrow. Advisory lanes are pretty much useless because they afford no legal or physical protection to the cyclist. Because the lane is too narrow, cyclists are encouraged to ride in the gutter, which is the wrong place to be in terms of safety. There are a number of sideroads, and for each of these you should be positioning yourself towards the centre of the road so you have good visibility into the sideroad, and also so you give any vehicles that may emerge from the sideroad a wide berth. By the kerb is absolutely the wrong place to be. There is an increasing amount of opinion that advisory lanes do more harm than good, because motorists tend to assume that cyclists belong in the cycle lane (however narrow) and pass too close to them.

The next problem is that the cycle lane goes through (not around) a number of parking bays. The original idea of these bays was presumably so that businesses along Kingston Road have legal parking outside for visitors loading, so the bays are restricted to short waiting time. In practice, most of the bays are parked in most of the time. In other words, the cycle lane for practical purposes ceases to exist at this point. If you were stupid enough to be in the cycle lane before this point in the first place, you now need to turn out into the middle of the main traffic lane to avoid the parked vehicles. See the picture below, taken on a Tuesday in the middle of the day, showing the westbound cycle lane completely blocked with vehicles for a considerable distance. 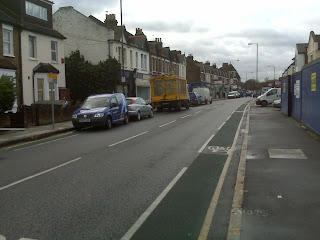 Of course, you or I could have predicted that if you create parking bays, people will park in them, thus rendering the cycle lane useless. The fact that the bays are there in the first place is typical of the kind of political fudge that we see time and time again in Merton. There are plentiful sideroads nearby that could be used for parking by local businesses for most purposes, but why risk an outcry when you could allow parking in the cycle lane? The paradox, which seems to have escaped the business lobby, is that a car-centric culture is bad for local businesses. Why shop locally when you can get in the car and go to the Savacentre or Tescos, or to Kingston? If more people cycled, some of these businesses would likely benefit. But people don't cycle, partly because cycle lanes are often opposed by the business lobby. But I'm getting off topic here.

Next problem: you'll notice there is only a single yellow line, so outside peak hours parking is allowed in the cycle lane. Can someone tell me what use is a part-time cycle lane? Parking is allowed in this cycle lane on Sundays, which is when a lot of leisure cyclists might be using it. Not only is it allowed, worshippers at the church on the north side of the road eagerly take advantage of the free parking: you'll find that side of the road completely parked up with churchgoers' cars on a Sunday.

All this parking brings with it an attendant problem: traffic needs to cross the centreline of the road to avoid parked cars, and traffic on the opposite lane then needs to encroach into the cycle lane to avoid the oncoming traffic in the middle of the road. Alert, considerate drivers will anticipate this situation and slow down if there is a cyclist in the cycle lane, rather than pass too close, but guess what - not all drivers fall into this category. Once again, you're better off taking an assertive position in the middle of the main lane to try to avoid encouraging dangerous overtaking.

In summary, this 'cycle lane' ain't worth the paint used for the white lines. It's too narrow, it gives no legal or physical protection, it encourages cyclists to adopt a dangerous road position and it is in any case unusable much of the time because of legally and illegally parked vehicles .

So why waste council tax-payers' money on such a scheme? I suggest there are a few possible reasons:
1. The council has to at least make a show of having a cycle network in the borough. Anything with paint counts as cycle network miles, regardless of its utility.
2. To be fair to the Council, there is all sorts of red tape such as Traffic Management Orders that makes it very difficult to put in a proper cycle lane. So the end result tends to be what the rules make possible rather than what is useful or safe.
3. The council doesn't have the will to restrict parking, and even if it did, there is a lot of red tape to make it difficult to do.
4. The council doesn't really understand cycle safety. It doesn't realise that this facility is completely useless.
at 3:58 AM