Police had blocked off the A24 just before Stockwell yesterday. 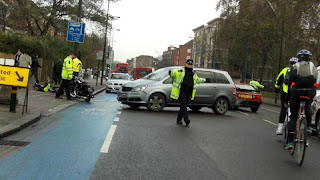 It was unclear exactly what had happened, and the cyclist appeared to be OK and was talking to a police officer. The silver car was stationary and appeared to have been involved.

However, it does illustrate a hazard. The car was likely making a right-turn into the side road on the left of the picture. The car would have had to wait a while for a gap, and cyclists coming down the blue lane may not have been visible to the driver. There's clearly a case for banning turns into and out of the side roads, as these junctions pose a significant threat to cyclists on the CSH, particularly to cyclists who think the blue lanes give them any sort of protection.
at 2:36 AM