The latest Cycle Superhighway, number 8, will take you from Wandsworth to Millbank, and officially opened on July 19th. At the same time as the lauch of this latest Superhighway, TfL have released a review of the first two Cycle Superhighways, which you can read here. You really don't need to waste your time reading the whole thing; you just need to read "Chapter 6: What will be done differently for future Barclays Cycle Superhighways". In fact, you don't need to read it. TfL didn't need to write it. Everything that is wrong with CSH #7 was immediately obvious from Day 1. In fact, it was obvious well before that point. Cyclists prefer it if they have their own lanes, they prefer it if those lanes are a decent width, and the prefer it if cars, whether parked or moving, stay out of those lanes. It really is that simple. Anyway, the key" lessons learned" paragraphs are:

"The implementation of mandatory cycle lanes is planned for future Barclays Cycle Superhighways where capacity and capability allows. Over the long term mandatory lanes will continue to ensure the benefits of cycle lanes on busy carriageways are realised, subject to their enforcement."


"TfL will aim to implement changes to the operation of parking bays along the Barclays Cycle Superhighways where practicable, to provide consistency along a route e.g. peak, off-peak, tidal. Wherever possible, potential parking issues will be designed out of future routes to avoid car parking on the Barclays Cycle Superhighways, and will be enforced where appropriate. Consultation with residents and businesses will take place where this is planned."

Note the weasel words: "where capacity and capability allows...where practicable...wherever possible". The important thing is that TfL, with the help of research from its Department of the Bleeding Obvious, now concedes that allowing parking and driving in cycle lanes is not such a terribly good idea.

Let's see if CSH #8 has been "done differently".

First, the good news. North of the river, along Grosvenor Road and Millbank, the lanes are mostly continuous, mandatory and fairly wide, except at a couple of junctions. 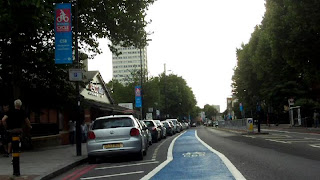 Above: Not too bad to start with. There are parking bays, but the lane goes round them with a reasonable 'door zone' allowed. 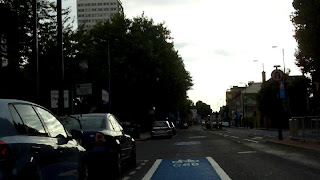 Above: Oh dear. The cycle lane is now too close to the last car (which is parked within the marked bay), and the lane ends abruptly. 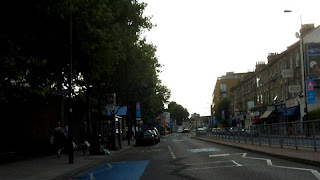 Above: It gets worse. The lane is in the gutter, but it's interspersed with parking bays. Here, there's a central reservation meaning that overtaking cars can't give you a wide berth if you keep those parked cars at a safe distance. There's no traffic calming or even a 20MPH limit here either. 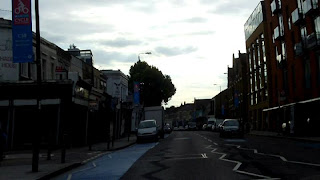 Above: More of the same, this time just after a pedestrian crossing, so cars will be accelerating past just as you get to the parked cars. 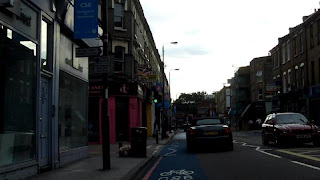 Above: The road narrows as you pass the Latchmere Road junction, so you have to make do with a 'ghost lane'. The car above is taking a perfectly reasonable line and not breaking any laws, even though it's in the cycle lane. 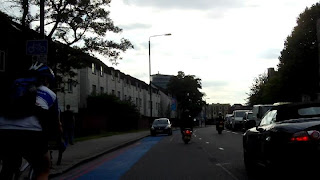 Above: Again, this is just after a junction, so you have to pull out of the blue lane just when cars have got up speed and are about to overtake you.

In summary, CSH # 8 south of the river is actually worse than CSH #7 on both key issues of parking and mandatory cycle lanes. There's more parking in the cycle lanes at peak times before 7PM which is when all the above pictures were taken. The lane is not mandatory and/or is too narrow for considerable stretches. It's perhaps not surprising that I didn't see a huge number of cyclists on this route.

I am sure TfL will protest that it "wasn't practicable" or "wasn't possible" to do anything about the problems you see in the pictures above. This simply isn't true. If you look at the parking bays, many of them could easily have been relocated into the side roads which are literally metres away, or simply removed altogether. With the stretch between Latchmere Road and Falcon Road, the reason the westbound lane is so narrow is there are two eastbound general traffic lanes. If the CSH attracts cyclists as intended, one of those lanes won't be used as it will be full of cyclists. That being the case, the left-hand eastbound general traffic lane could be narrowed to allocate more space to the westbound lane. (Interestingly, one eastbound lane has been blocked for some time by building work. It's amazing how whole lanes can be taken out for months or even years at a time for construction projects, but for cycling the excuse is always "wasn't possible").
The idea of reconfiguring the road to remove a traffic lane won't have occurred to TfL, because they are concerned with theoretical capacity and flow issues that take place on computers that don't have cycling programmed into the model.
at 1:37 AM