Wandsworth Council have spent a bit of time and money improving the junction between Wimbledon Parkside and Princes Way. First, a bit of background. This junction is just before the massive Tibbetts Corner roundabout which forms the junction of the A3 and Putney Hill. Motorists blast round it at high speed, making it very hostile indeed for cyclists. Fortunately, there's an off-road alternative under the roundabout, but to get there you need to come off Parkside and make a right-turn into Princes Way. Currently that right-turn is banned so that motors don't try to rat-run into Wandsworth avoiding the West Hill queues. 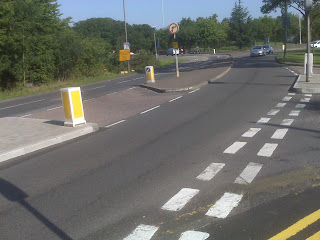 Above, looking north up Parkside just before Tibbetts Corner, at the Princes Way junction. The logical, but illegal maneouvre is to make the right turn between the bollards on the left of the picture. 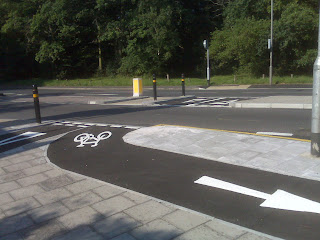 Above you see the new right-turn facility for cyclists. You wait in the reservoir in the central reservation, then make the right turn onto the on-pavement lane. Trouble is, you're now on the wrong side of Princes Way. 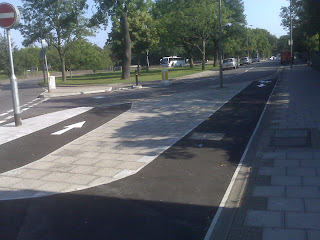 You now have to cross Princes Way to get to the correct side. For motorists coming down Princes Way, there's nothing to warn of a cycle crossing at this point. 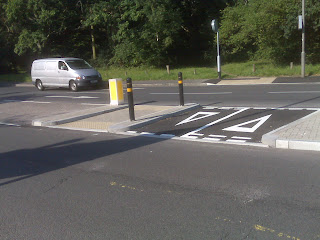 Above: A closer look at that cycle reservoir in the first picture. To get to it, you have to get into the right-hand lane, and as a consequence you'll be going pretty fast as you approach the reservoir. The last thing motorists behind you will be expecting you to do is brake, but that's exactly what you'll have to do to make the turn into the cycle reservoir. And motorists won't be slowing down just yet for the roundabout. So the safest thing is likely to leave your braking till the last possible moment to minimise the possibility of getting rear-ended. What they should have done is get rid of the island on the left of the picture to give a proper approach lane. Now imagine it's a dark rainy night. Braking hard and swerving on wet road is not generally a good idea, but it's potentially a choice between that and the rear hit I was talking about. Overcook your braking and you could be going home in an ambulance.

Now let's look at how the new junction layout works going in the other direction. 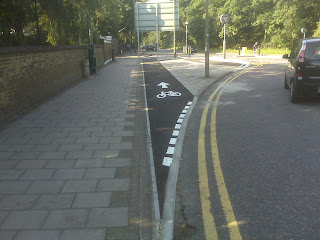 Above: Rather than emerge from Princes Way you're expected to leave the carriageway on this path. 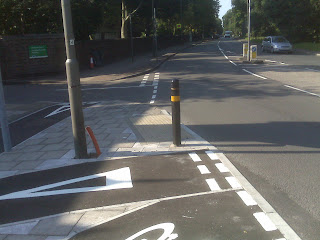 Above: You can either turn right into the cycle reservoir mentioned previously, which will take you to the roundabout. That's unlikely though, as if you're brave enough to take on the roundabout you'll turn right at the end of Princes Way with the motor traffic; you won't go out of your way to take this path. On the other hand, if you elect that discretion is the better part of valour, you'll be using the off road alternative to the roundabout so you won't be coming this way in the first place.
Alternatively, and more likely, you'll be going towards Wimbledon, so following the path on the left of the picture. However, the layout is pretty poor. Motorists don't expect traffic to emerge from the tiny side road where the path stops. The path is pretty much parallel to Parkside, so you'll have to do a careful rear observation to check what's coming at you from the roundabout at precisely the time you should be accelerating to merge with the traffic. To make matters worse, there's a pedestrian refuge acting as a pinch point just beyond the junction. I think it's probably better to make the left turn at the Princes Way junction instead. You'll likely get a better chance to accelerate into the traffic, the sightlines are better and motorists will be expecting emerging traffic.

I promise you I get no pleasure from carping about cycling facilities. It could be this one is better than it appears, but it does seem to have been designed by someone who doesn't cycle and has no understanding of the problems of this junction for cyclists. A significant amount of money has been spent on a scheme that really doesn't solve the problem. True, it's now possible to make a legal right turn from Parkside, but you could get the same effect at much less cost by taking a nibble out of the island in the first picture above.

There's one last elephant in the room that Wandsworth have ignored: the hostile nature of Parkside itself. Every hundred metres there's a pinch-point from a pedestrian refuge, so it's necessary constantly to adjust your road position to deter dangerous overtakes whilst trying not to obstruct traffic unnecessarily. The width of the pedestrian refuges could be used to construct a cycle path on the north side of Parkside. As it is, very, very few cyclists will use the new junction because so many avoid Parkside like the plague.

This kind of scheme is pretty typical of why cycling in outer London is in the doldrums. It's an expensive spot improvement that doesn't do much to improve conditions, and it connects roads that are at least as hostile as the junction itself. It might make journeys marginally safer for existing cyclists, but it won't attract a single extra cyclist or even cycle journey.

**UPDATE**
I rode through this junction from the Wimbledon side on Sunday. My analysis above was correct: the approach to the cycle reservoir is not adequate. What I didn't spot however is that because the cycle reservoir is the 'wrong' side of the Princes Way junction, you are in conflict with vehicles emerging from Princes Way as well as traffic already on Parkside coming from the roundabout.
Also, once you've crossed Parkside and you're on the east side of Princes Way, rather than cross Princes Way at the junction it's better to follow the eastbound cycle path in the 5th photo above in the wrong direction and then cross Princes Way, because you avoid any queueing traffic.
at 3:51 PM