Some observations a year or so on from the opening of CSH #7. 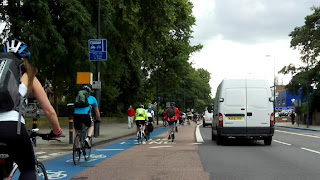 Above is the scene heading south-west from Stockwell around 6PM on a weekday in early July 2011. I joined the CSH at the Stockwell Gyratory, and the cyclists were at least two abreast as far as the eye could see. You can see them spilling out of the blue lane into the bus lane, and it was like this pretty much continuously right up to Clapham Common. The cycle traffic was so dense that motors had difficulty making left turns. The cyclists had definitely thinned out considerably by the time I got to Balham however, and the number making the full-length journey to Colliers Wood was fairly low. 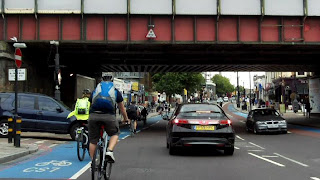 Above is the scene at Clapham North on the same day.

The cycle traffic seems to have very well-defined peaks. I cycled the same route the next day but about half an hour later, and there were far fewer cyclists. Being among this many 'peak hour' cyclists does give you a sense of 'safety in numbers', but for me the feeling of security is more to do with having a lot of potential witnesses around should a collision occur than with objective safety. There are plenty of hazards: the junction treatments are rudimentary (with the odd exception) and there are lots of side-roads with motors turning across the blue lane both left and right. Additionally having this many cyclists has its dangers: I've seen cyclists close-passing left and right at speed, and I saw one riding with elbows on the grips and hands in the middle of the bars so he couldn't reach the brakes. He actually clipped another rider's wheel, which fortunately didn't result in an 'off'. I think the reason there aren't more incidents is that when you ride regularly you develop a kind of 'hyper-awareness' of what's going on around you.

Whatever the reality of cycling trends in London - and I don't have a lot of faith in statistics in this area - anyone seeing this scene will get the impression that there are a lot of people cycling, and may even be tempted to join them.
at 2:17 AM