I had occasion to visit Brussels, Belgium the other week. Only a short visit so I didn't get the opportunity to study the cycle infrastructure in any detail, but I did take a couple of pictures. 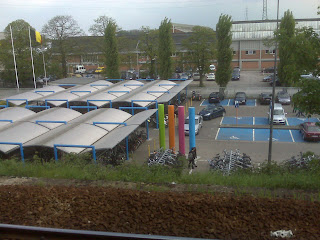 Above you can see the parking for a suburban rail station. There's way more bike spaces than car spaces here: you can see three uncovered racks on the right and to the left, another eight covered racks. Compare this with Morden or Wimbledon stations - there's probably an order of magnitude fewer bike spaces at comparable stations in good old Blighty. 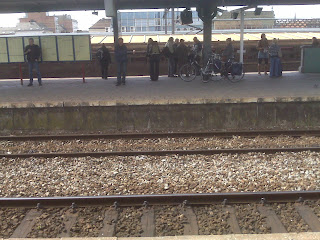 Above you can see two non-folding bikes with their owners waiting for a train. This is in the middle of a weekday: it's pretty clear that bikes are welcome on trains and people do actually combine these modes of transport.

The weather in Brussels is just as wet and cold as the UK. Brussels clearly isn't noted for its cycle infrastructure, but it's still way ahead of the UK. If Brussels is in the second division by European standards, we're at the wrong end of the Ryman League.
at 1:29 PM