Here's a pic of one of the chicanes: 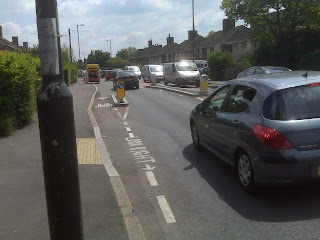 Notice how the chicane in the middle of the road forces the vehicles over to the left, just as the cycle bypass ends. Believe it or not there is a 'give way' where the cyclist is supposed to stop to allow the motor vehicle to pass. This is a straight, wide road with enough room for cyclists - or it was until they put these ridiculous obstacles in.

Here's another pic, where they've ripped out the chicane: 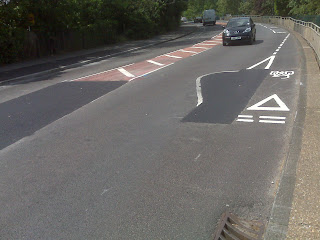 What they need to do next is remove the hatched area in the middle of the road and put in 2M-wide cycle lanes as per TfL's cycle design standards. The road is wide enough. That's what a competent designer would do. We'll see.


I don't think there's ever been a worse-designed scheme than Martin Way. There are dangerous roads aplenty in London, and there are lots of cheaply-implemented cycle lanes that are too narrow and full of parked cars, but this is a scheme where someone has actually considered the fact that there are cyclists on the road, and spent a lot of money making life as difficult and dangerous as possible for them. How on earth was it possible for anyone even vaguely competent to design such a scheme, audit its safety and approve it?

You'll be pleased to know that Merton Council agree with me and the many other people who have pointed out the dangers.

This is a relatively recent scheme, costing nearly £250,000. As you can see, Merton Council are spending more money ripping it out. Guess who's paying? Not the idiots who designed it. Not the idiots who approved it. No, it's you and me, the Merton council taxpayers. The only good news is the aforementioned idiots could lose their jobs in the spending cuts that are coming our way over the next 5 years.
at 9:18 AM