On my travels around Merton, I'm seeing an increasing proliferation of illegal pavement parking. Isn't it strange how the media gets all hot under the collar about cycling on pavements (which is in large part brought about by the fact that one cannot safely cycle on many roads) but when it comes to driving on the pavement, they are silent?

So it's left to blogs like this one to tell the truth. As I've pointed out before, pavement parking and driving on the pavement (which is of course necessary if you're going to park there) is dangerous and usually illegal. Children should be able to walk and run down the pavement safe in the knowledge that a car won't reverse into them because the driver cannot see. That's the whole point of a pavement - it's a safe area, segregated from the dangers of motor traffic.

Yet look at this scene in Canterbury Road. 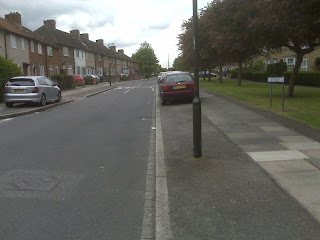 Cars parked on both pavements. Yet there are no apparent markings or notices that this is allowed. Maybe I'm wrong?
Here's Arterberry Road: 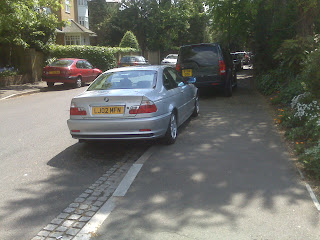 Again cars parked on the pavement causing considerable obstruction in some cases. Look at that Land Rover. A child standing on the pavement just behind the vehicle would be invisible to the driver, who might well need to reverse to get out of the parking space. Of course, if that happened, in the eyes of the justice system it would be a case of  'Sorry Mate I Didn't See You', a tragic accident with no-one to blame, except the child who should have been on stilts wearing high-visibility clothing and a helmet. No wonder road death is the leading killer of the young.
at 9:47 AM