No Cycling in Dean's Yard Westminster

Dean's Yard is a nice little cut-through in Westminster that enables the crafty cyclist to avoid Great Smith Street. It's a beautiful little square in the old precincts of the Westminster monastery, which today forms part of Westminster School (responsible for bringing us Nick Clegg - thanks for that). 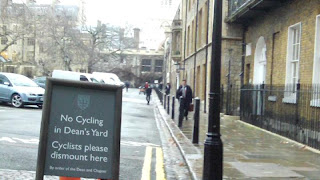 It appears that Dean's Yard is private property and has only permissive access. I have not researched what the legal position actually is. According to the man in uniform, cyclists have been running into pedestrians.

I have no idea how much of this is due to actual incidents and how much is petty jobsworths who don't like cyclists: I suspect it's a combination of the two. There are quite a lot of pedestrians around, many of whom seem oblivious to the fact that it's a road, and part of the problem is the barrier at the Victoria Street end making a bottleneck. There seems to be a general attitude in the UK that if there's a collision between a cyclist and a pedestrian, the presupposition is it's the cyclist's fault and therefore ALL cycling should be banned, whereas if the collision is between a pedestrian and a car, it's the pedestrians fault for being in the road, and perhaps barriers should be erected to keep 'em on the pavement and out of the way. Any restrictions on cars are deemed to be unfairly catching 'innocent motorists'.

This isn't that big a deal. For me it'll be quicker to go down Great Smith Street, if rather less pleasant, and in any case the Yard is closed quite early in the evening. However, this does tell a familiar story of cycling in London. As a cyclist, you're either ignored or made unwelcome. Cycling is normally not considered, but when it is, it's seen as a problem. When it comes to law enforcement, comparatively minor offences committed by cyclists are cracked down upon with disproportionate zeal, while motorists are free to speed, chat on mobile phones and stop in ASLs unmolested by the forces of the law. Cyclists are caught up in restrictions intended for motor traffic because no-one of influence in Westminster Council can be bothered to consider the effect on cyclists. All of these individually are petty annoyances, but it's the sheer number of petty annoyances that scales up to a large deleterious effect on cycling.
at 4:31 AM