No More No Entry ?

LCC reports that the DfT will be allowing the addition of 'except cyclists' to no-entry signs after successful trials.

In Brussels you notice that most no-entry signs have a cyclists exception.

Hopefully that'll put an end to ridiculous conditions for cyclists such as those found in Covent Garden: 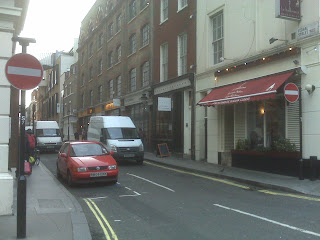 Above: You can't turn left into Floral Street from Bow Street. 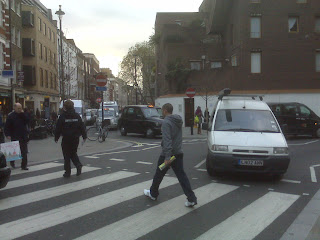 Above: You can't turn left into Long Acre from Bow Street. 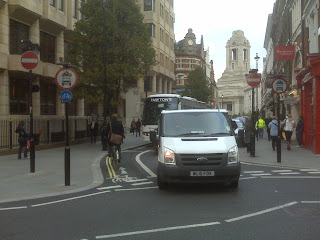 Above: You can turn right into Long Acre from Bow Street even though the signs seem to suggest you can't. 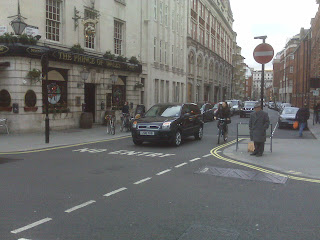 Above: No right turn into Drury Lane from Great Queen Street.

The above is just a small selection of nibbles from a veritable smorgasbord of one-ways in this area: if you look at Google Maps you'll see quite possibly a majority of minor roads have such a restriction.

You can bet all these no-entry and one-way restrictions were introduced to stop rat-running and ease motor traffic flow, by people who were either completely ignorant of cycling, simply didn't care, were actively hostile or were just doing it out of spite. That'll be Westminster Council then.

Of course, the DfT approving 'cyclist exceptions' won't make them happen overnight. It'll take a program of implementation to attach the exception signs. There's probably no program that gives better leverage though, in terms of benefits per pound expended, but you should never underestimate local councils' ability to mire something so apparently straightforward in bureaucracy. In these austere times it'll be interesting to see which councils can scrape together the coppers and have the will to make it happen.
at 4:38 AM