Pavement parking seems to be spreading in Merton. 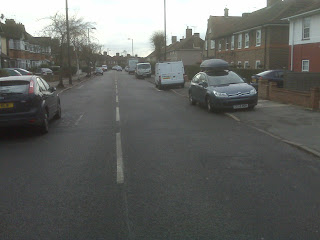 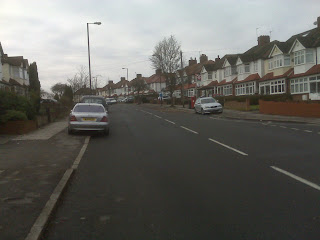 Above is the scene in Cannon Hill Lane (top) and Hillcross Avenue (immediately above), both of which seem to have had their pavements partly usurped for parking. There's no signs or markings to indicate this is legal, but the Council refuse to enforce against it which is why it's become established.

What problems does this cause? On the face of it, not many. The pavement isn't actually blocked. People can still go about their daily business. They can walk, drive, park, or even cycle. Partially-sighted people will have problems, but who cares about them?

There are some more subtle, insidious effects though. One car parked on a pavement doesn't generally cause a huge problem. But lots of cars and panel vans lining a pavement causes lots of little problems that scale up to make the neighborhood a considerably less pleasant place to live.The fact that cars and panel vans are manoeuvring onto the pavement, particularly at school-run time, causes danger for children who are on foot. The reduction in pavement space means it's harder for younger kids to cycle, use scooters or just run around and play, and it makes pedestrians walk in single file. Then there's the 'urbanization by stealth' that turns a quiet residential street into a car-dominated rat-run. It widens the traffic lanes which in turn leads to higher traffic speeds - both these roads suffer from speeding - and likely to higher traffic volumes. The effect of cars and vans parked on the pavement looks scruffy and unwelcoming. The street is no longer a pleasant social environment -  the whole street, pavements included, is subsumed to the car. Would you rather live on a road with lower speeds and traffic volumes, with trees instead of cars on the pavement? Most housebuyers would. Unfortunately, the residents of these roads may not be fully informed of the downward effect the Council's policy will have on their house prices, or of what the alternatives may be to parking on the pavement. Most car owners likely start parking on the pavement to protect their cars from being hit by speeding cars. There are solutions to that problem that don't involve pavement parking. Such solutions cost money, some people might protest. That may be, but pavement parking damages both the pavements and services underneath; neither are designed to withstand the weight of vehicles or the constant battering of parking. What also costs money is the increased collisions caused by higher traffic volumes and higher speeds.

The Council's policy of turning a blind eye to pavement parking also weakens their ability to improve neighborhoods by planting roadside trees or making the street more of a community space. Once established, pavement parking is likely to spread and be difficult to eradicate. Failure to act against it is the sign of a weak-willed and short-sighted administration.
at 3:05 PM