The Strand is a major east-west route between the West End and the City, and in common with Victoria Embankment, it has no cycle lane. It does have a bus lane, so why am I complaining?
Because in the westerly direction, going towards Trafalgar Square, the bus lane is permanently choked with traffic during the day.
Now, you might point out that The Strand is too narrow to accomodate a cycle lane.
Let's take a look.. 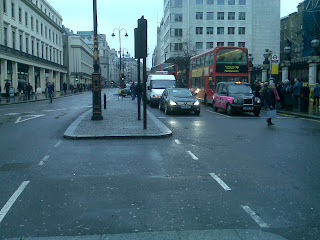 Above is the view looking east, from Charing Cross Station. There's a wide island in the middle of the road. Plenty of space here then, as there's no pedestrian crossing at this point. 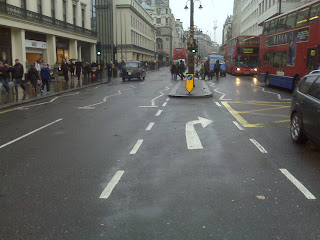 Above, a little further east, still in front of Charing Cross Station. Plenty of room for a righ-turn lane for taxis. It's worth noting that the easbound carriageway is not usually congested - above was taken on a weekday lunchtime. 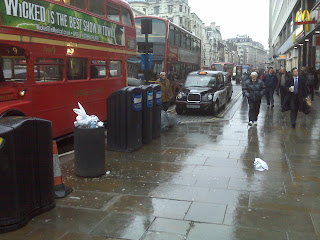 Here's the view looking east from a point just beyond Charing Cross Staion.Plenty of room here for lots of bins where people can get rid of the free papers they collect on the tube and their hamburger boxes from Mucky D's, plus room for a taxi rank. Bear in mind the station has taxis and is only 10 yards away. Maybe the more obese customers of McDonald's can't walk that far?
Just beyond the taxi rank, you can see a phone box. Who on earth uses phone boxes these days? Well, I suppose they do have a couple of purposes - 1. amusing the tourists; 2. advertising for prostitutes. 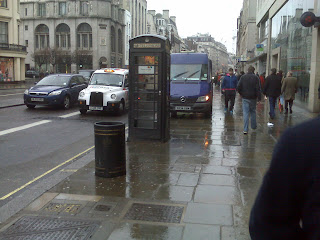 Above, further on, another  bin, a  phone box, and a security van parked outside a bank... 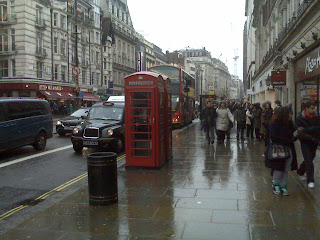 Above, a little further on, yet another bin, two quaint old phone boxes ... 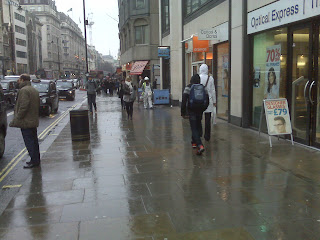 Above, just before Adam Street. Room for another bin, set well back from the kerb, and a couple of shop advertising boards. On the corner of Adam Street, the cafe with the striped awning has tables outside on the pavement.
Now, I'm not suggesting that it would be an easy task to put a westbound cycle lane on The Strand. But I am saying that the argument that 'there's no space' doesn't hold water. There's space for everything, it seems, bar a cycle lane.
at 1:57 AM