Trafalgar Square is an accident waiting to happen, as I've described before. Let's take a closer look at what the hazards are, as you approach from The Mall: 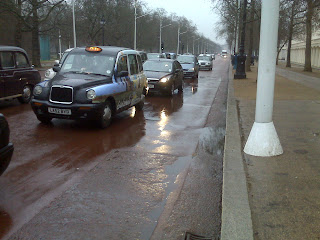 As you can see above, as you approach Admiralty Arch, there's no cycle lane, despite this being one of the widest roads in central London. There's loads of room. Fortunately, the motors tend to keep away from the kerb so normally there isn't a problem filtering up the inside of the queueing traffic. There's an offroad cycle lane further up The Mall, although it's quite well hidden, with a few very small discreet signs. 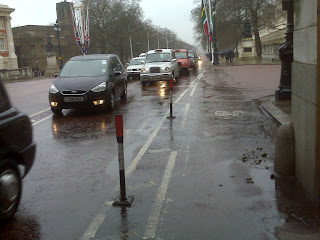 Finally, just before Admiralty Arch, there's a cycle lane that takes you through the Arch (above). It ends as soon as you exist the arch, though. 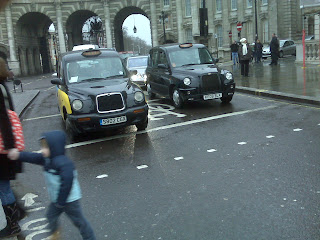 Above, a typical scene where The Mall enters the roundabout below Trafalgar Square. The ASL is full of the Pride of London, the black cab. Note also, there's plenty of roadspace in the middle. What often happens is, not only is the ASL blocked, but there are motorcycles blocking the cycle filter lane on the left of the road, so you can't filter to the front.
Below, the view from the same point, looking east towards The Strand: 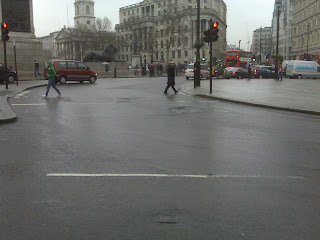 This roundabout is pretty lethal. There are three lanes of traffic, and multiple exits from the roundabout. So you can't just pootle round the outside. If you are trying to go on to The Strand, as many cyclists are, you have to cross three lanes of traffic. The logical thing would be to take a cycle lane across the central island you see on the right of the above photo. This would fit in well with the existing traffic light controls around the roundabout. A similar arrangement is already in place at Lambeth Bridge. This would at least get cyclists out of the rough-and-tumble of the roundabout.
Here is the view from Cockspur Street looking east: 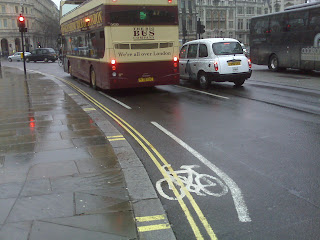 Another wide, wide road, with a wide, wide pavement, but too narrow for anything but a 1m advisory lane. Note the bus has entered the ASL. 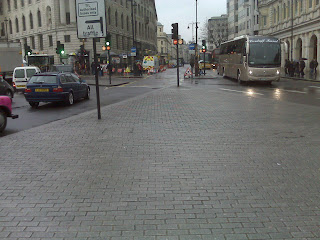 Above, the island separating lanes leading into and out of The Strand. This again could be used for a cycle lane.
The Trafalgar Square area has a very high cycle count, and is also very busy with traffic. If there's one place in Westminster where decent cycle facilities would pay dividends, it is here. But the council have done absolutely nothing.
at 2:28 PM