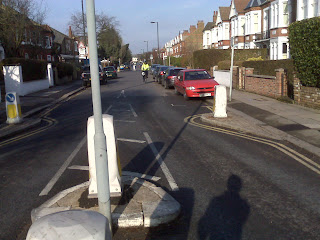 Trinity road is part of the cycle network in Merton, and runs between The Broadway and Queens Road. (map)

Typically though, no-one who cycles or who understands cycling has apparently had input into the cycle route design in this area. In case anyone at Merton Council are interested, here are the problems that you face if you actually try cycling on Trinity Road:


There is a 20MPH speed limit, but it is not well-enforced and is widely ignored. There is some attempt to calm traffic speeds by installing chicanes. These chicanes are actually hazardous for cyclists. What often happens is that an impatient, speeding driver will see a cyclist and attempt an overtake, failing to anticipate the chicane. The driver will see the chicane too late, brake and swerve into the chicane, cutting the cyclist off, or even hitting the cyclist. Parking is allowed on both sides of the road. Because the road is narrow, cars again will tend to overtake and swerve into your path if there is an oncoming car.


You'll notice in the picture, the red car nearest the camera has parked on the pavement, presumably because the owner is worried about cars swerving into and out of the chicane and crashing into his cherised motor.


The sad thing is there are some very quiet roads nearby - Kings Road and Stanley Road - which would make ideal cycle routes. But they are part of a complex system of one-way roads (designed to discourage rat-running), so cyclists are forced into using the most dangerous route (Trinity Road) unless you are prepared to navigate through the one-way system and considerably lengthen your journey. It would be a simple matter to allow cycling against the flow on these roads.


So, in summary, Merton Council's treatment of these roads actually discourages cycling. Nice work, lads!
at 7:15 AM