Lupus Street, SW1 is a convenient cycle route that enables the cyclist (and the rat-running motorist) to avoid the busy 4-lane Grosvenor Road. It is part of the London Cycle Network, so it is an official cycle route.

It is also an exemplar of how not to do cycle infrstructure. It really is total cr@p. Come with me, dear reader, on a brief tour:

First, the good bit. It's only good because the western end of the street is currently closed to traffic due to roadworks: 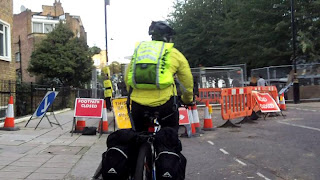 After the roadworks, things get steadily worse. 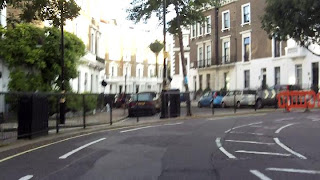 There are three things wrong here. Parking is allowed in the cycle lane. The cycle lane is advisory only, and is narrower than it could be because Westminster Council have chosen to have a hatched area in the middle of the road to keep the two lanes of speeding traffic apart. This street could have a 20MPH limit, but Westminster Council hate speed limits as much as they hate cyclists. Lastly, you've got those railings right by the road, so if a speeding driver cuts you up, you'll be heading straight for them (and St Tommy's A&E). 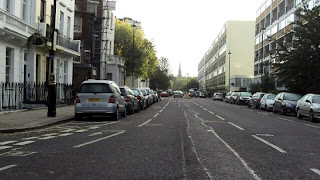 Next, you see the cycle lane is right next to a junction and then right next to a line of parked cars. There is no door zone: if you are stupid enough to cycle in the cycle lane you're at risk of getting knocked off by someone opening a car door. In fact, the cycle lane marks exactly where you should never cycle. For safety and to be visible, you should be in the main traffic lane in this situation. Of course, what Westminster Council could have done is have a segregated cycle path - look how wide the road is. But that might just encourage cycling, which Westminster don't want. 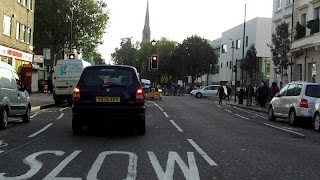 Next, you see two vans, one half-parked in the cycle lane, one completely blocking it. 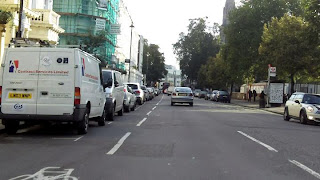 Another cycle lane. Parked vehicles are encroaching into it. Even if they weren't, you should under no circumstances cycle in it as it has no door zone. But because it's there, drivers will probably expect you to do so and get quite upset if you get in their bit of the road. 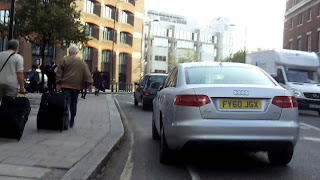 Why is this car in the cycle lane? Because there's a well-placed pedestrian refuge that forces them into it. This is truly lethal. But it gets worse... 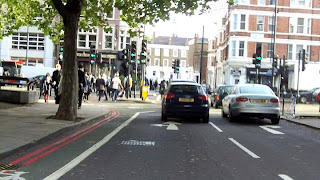 What annoys me most is they've actually spent money ruining a perfectly good road. It would be safer for cyclists if they'd done nothing at all. Because they've spent money and bought a pot of paint, it looks like cyclists should be grateful for this consideration. Someone who doesn't cycle may think: what have cyclists got to whinge about? Look at all this marvellous infrastructure! Cyclists should really pay the congestion charge and road tax like the rest of us!
at 6:08 AM