TfL are just getting started on CSH#8 which takes you from Wandsworth to Lambeth Bridge in one continuous, Barclays-blue experience. I've taken a look at the state of the planned route as it is now. The whole thing would make a rather long post so I'm going to break it up into bite-sized chunks so you don't get indigestion. Let's start at the beginning, which I find is usually a good place to start: 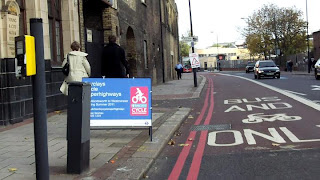 Above: Ram Street, Wandsworth, where it all kicks off. There's a helpful sign announcing the project. A decent contraflow bus/cycle lane, although going the other way they'll need to sort something out as there's nothing for cyclists there at the moment. (They've put some on-road CSH symbols, so the portents aren't good.) 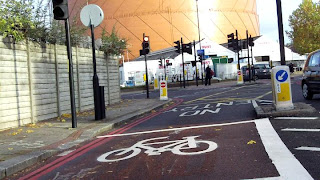 Above: The junction of Ram St and Armoury Way. This is a light-controlled junction. The CSH#8 map shows Barchard St as an alternative to Armoury Way, but it's not clear how that works - it may be westbound-only. 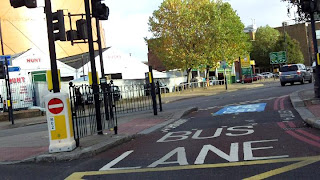 Above: The junction of Ram St and Armoury Way. You've now got to get in the middle of the 4-lane Armoury Way to get in position for Old York Road. How easy this is depends on how you cath the lights, but it can be a pretty scary experience: 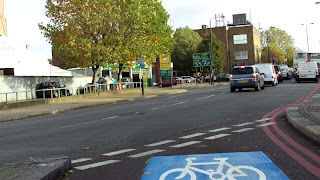 Above: The junction of Ram St and Armoury Way. You've got to get to the outside of the grey car. 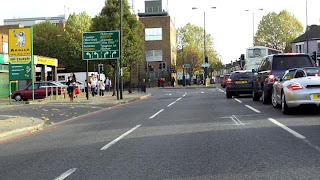 Above: On Armoury Way. Clearly, they'll need to put some kind of cycle lane in but exactly how it's going to work is unclear. Today if you're not pretty nippy, there'll be two lanes of traffic bearing down on you at high speed. 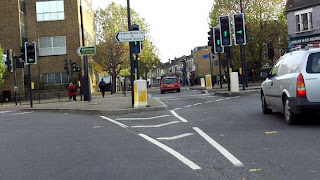 Above: We go straight on at these lights into Old York Road, following the red car. 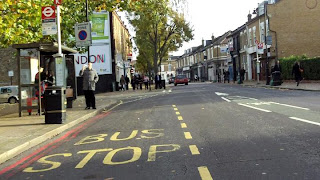 Above: In Old York Road. This is reasonably quiet most of the time. There's apparently going to be a 20MPH limit. 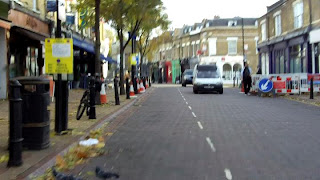 Above: Old York Road has parking spaces which narrow the road considerably. You'll never get 2 decent cycle lanes plus a traffic lane along here without getting rid of the spaces. In the evening the westbound traffic can get quite backed-up. It would be advisable to reduce motor traffic along this road. 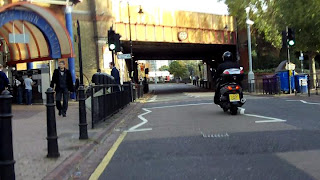 Above: Further down Old York Road. The logical thing to do here would be to cut through right into Podmore Road, and go over Trinity Road. That way you don't have to get round the Wandsworth Gyratory (better known as the Nurburgring). But TfL have decided that's not a good idea... 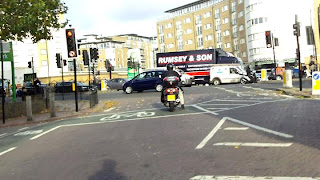 ...so instead we end up at the junction of York Road, Swandon Way and Smuggler's Way (above). This is a huge, massively complex junction with more traffic lanes than you can shake a stick at. You can wait ages at these lights because there are multiple right-turn phases. As usual in the morning rush the traffic is stationary on Swandon Way. 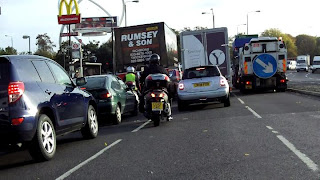 Finally the lights change in our favour and we're off, turning right into York Road. Lane selection is very tricky here. There are two lanes that go left over Wandsworth Bridge, so in theory we want the right-hand lane to go straight on, but if the traffic is actually moving that can be a very dangerous place to be. If the traffic is stationary, you can't get through so you're better off in the bus lane (below): 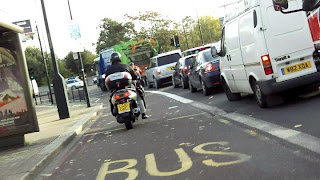 Now the fun really starts. You have to get across two lanes of traffic to go straight over the gyratory. If the traffic is solid that's not too hard, but there's a possibility of cars getting into the wrong lanes and cutting in and out. It so happens that there are off-road cycle facilities to get you round, but it's not clear if the CSH will use these or if there is some other plan. 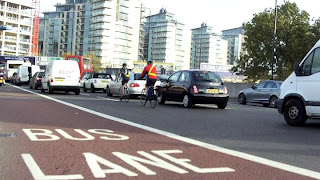 Anyway, here we are at the gyratory (above. We've got to get across the bus lane and two other lanes. 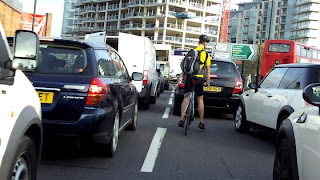 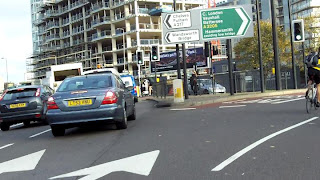 That's it, now into that bus lane and through the lights... 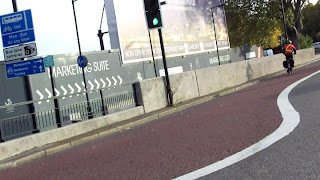 And the bus lane safely guides us into York Road.

That's enough for now. You might be thinking that TfL would have a hard time picking busier, more dangerous or less cycle-friendly roads. You'd be right. There's a quiet alternative that avoids most of this nonsense, that they've elected against for reasons best known to themselves. It is likely that they've chosen to use only TfL-maintained roads so they don't have to negotiate with the boroughs, but that's hardly a recipe for the best choice of cycle route given that all TfL roads are busy major routes. It's a bit like saying because you don't own a screwdriver you're going to use a lump hammer. In any case, they've had plenty of time to get agreements in place with the boroughs to use minor roads.

However, don't fret too much because the next section I'll cover in Part 2 is less like a horror movie.
at 6:14 AM