There have been some works on the railway path that runs on the north side of the main railway line from Wimbledon to Raynes Park. 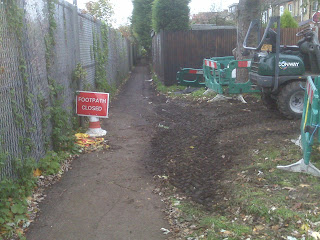 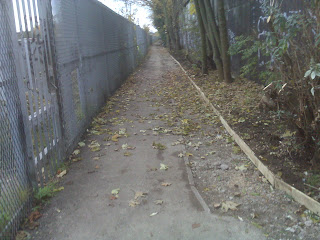 It appears that this path is being widened to form a cycle path. About time too! This has been planned for twenty years. When complete, it should be the best thing Merton has done for cycling in, well, 20 years. It should give cyclists a more-or-less traffic free route from Wimbledon to Raynes Park, and onwards to the A3 along the existing Coombe Lane segregated cycle path. There'll still be a couple of irritations:

1. It'll be necessary to cross Lower Downs Road. Here, it would be perfectly possible to install a cycle-priority crossing. Given that motor traffic is single-alternate-line here, a crossing wouldn't significantly impact on traffic flow.
2. Raynes Park itself is still very compromised from a cyclist's perspective, with a mess of shared pavement and the odd 'dismount' sign, but with the Railway Path in place there'll be more incentive for the Council to fix it properly (in the unlikely event of any spare cash being found).
3. There needs to be a proper link between the Wimbledon Chase cycle path and the Railway Path. Currently the choice is to go over one of the pedestrian bridges, which means hauling your bike up a flight of steps, or Lower Downs Road, which is a busy road with no cycle facilities.
4. There need to be links up the hill to Wimbledon Common.

But it's progress, the like of which we've not seen for many years. At this rate, by 2200, we might have a decent cycle network in Merton.
at 4:10 AM