Following on from my first post covering the route of CSH8 before it's turned into a Cycle Superhighway, this piece covers the route starting from the Wandsworth Bridge gyratory going east. 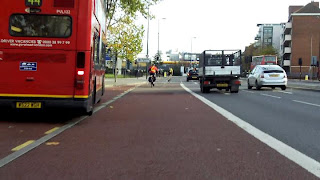 Above, York Road and we have a wide bus lane making for relative safety. 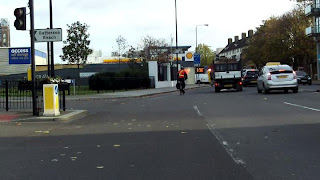 Above, at Juniper Drive, the bus lane comes to an end briefly... 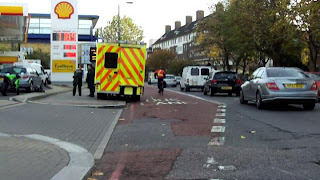 only to resume at the petrol station. 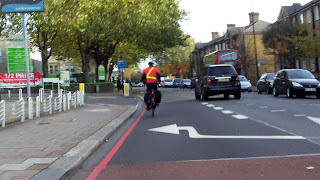 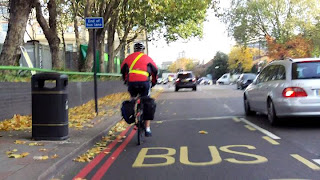 and there's no lane on the approach to the next junction, Cotton Row. (above) 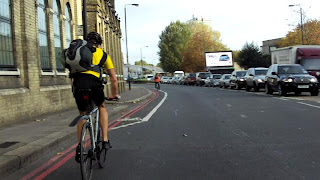 (Above) After Cotton Row, there are two eastbound lanes and a very narrow, albeit mandatory, cycle lane. This is the kind of thing that must improve. 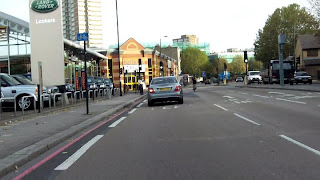 Believe it or not, the lane gets narrower still, and becomes advisory. Plenty of room for a wider cycle lane here. 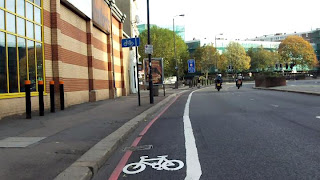 (Above) After Lombard Road, the mandatory lane is back, a little wider this time. 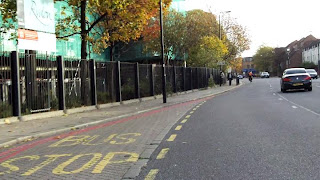 (Above) However it soon disappears and we're left on a 4-lane road with no cycle lane. 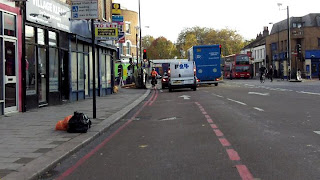 (Above) The approach to Falcon Road/Battersea High Street junction has  some loading bays. Are TfL going to relocate these, or will we have the spectre of parking being allowed in the cycle lane? 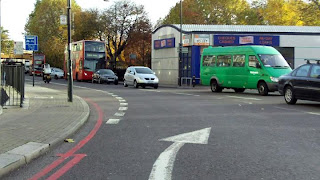 (Above) After Falcon Road/Battersea High Street, the bus lane is back. 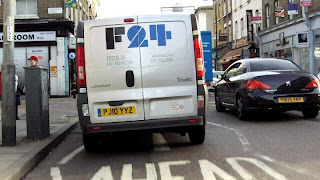 (Above) As York Road becomes Battersea Park Road, the bus lane disappears and we have serious problems. There will be no alternative but to remove a traffic lane on the approach to Battersea Bridge Road. Again, there are parking bays along here which should be relocated. 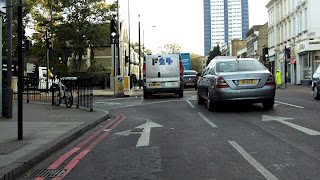 (Above) The junction with Battersea Bridge Road.We have a hazard from traffic turning left at this junction. 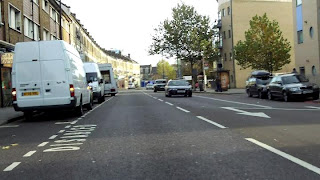 As we continue, the road becomes a wide single lane. There's parking bays as you can see. 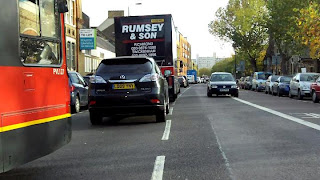 (Above) Continuing to the Battersea Park area, the traffic gets very heavy. Here there's a single traffic lane and parking places. It will be quite difficult to squeeze in a decent cycle lane with some tough choices being made. Can TfL deliver? 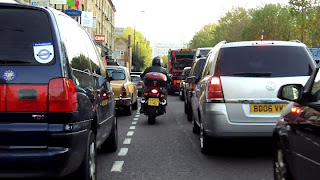 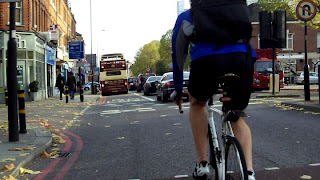 (Above) At Macduff Rd, the route turns left and then picks up Prince of Wales Road. 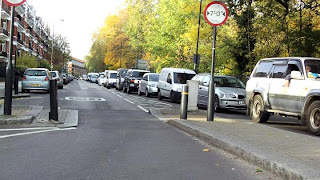 (Above) Looking back from Queen's Circus down Prince of Wales Road, you see the traffic is solid. The lanes are narrow, so again to get a usable cycle lane will require some tough love. 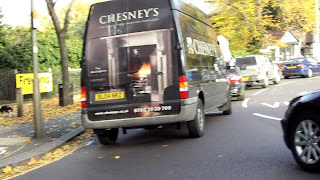 (Above) Queen's Circus, where the route turns left up Queenstown Road. For eastbound cyclists this will simply require a cycle lane which should be easy to fit in, but westbound will be more of a problem because it's necessary to make a right turn round the multi-lane roundabout. This is a real safety hazard. 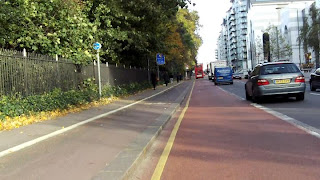 (Above) Once on Queenstown Road, there's a segregated lane on the footpath or a bus lane to choose from. 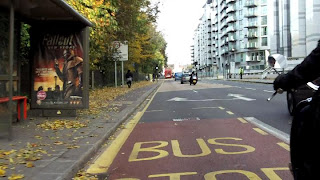 (Above) The bus lane on Queenstown Road stops and starts. 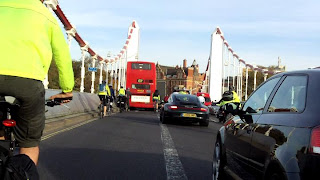 (Above) Chelsea Bridge. This is very hazardous, because you need to get to the right-hand lane to make the turn at the north end into Grosvenor Road.

When I rode the route during the morning rush, the traffic was fairly light along York Road, but there was congestion in the Battersea Park area. In summary, the first part of York Road doesn't present many problems for the CSH designers to solve, but as the route approaches Battersea Park there are significant roadspace issues. It may have been more sensible to make Prince of Wales Drive one-way to motors and give the other lane over to the CSH. Queen's Circus and Chelsea Bridge are dangerous and TfL must not compromise on safety here.
at 3:26 PM