The Strand is a good example of how TfL and Westminster Council have failed to manage the roads effectively. 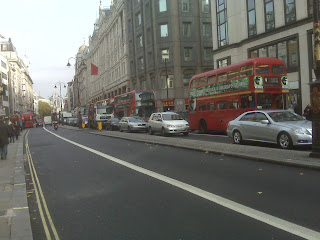 Above is what The Strand looks like most days. It's nose-to-tail going west, but virtually deserted going east. For cyclists, the narrow lanes and central reservation make it impossible to get around the westbound congestion. Today I saw 4 cyclists, including 2 on hire bikes,  pushing their mounts along the pavement: 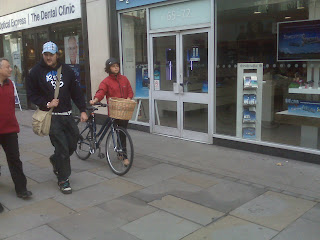 I also occasionally see cyclists cycling along the top of the central reservation.

The canny cyclist might think of taking a detour to avoid The Strand. For example, take a left down Savoy St, along Savoy Place and up Lower Robert Street. But that's not possible, because Lower Robert Street is a one way rat-run: 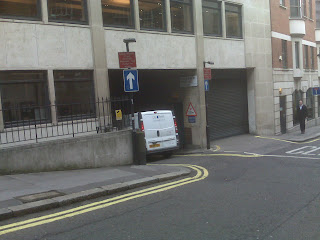 Alternatively, the crafty biker might take a left at Adam St and go along John Adam St. But again, their way is barred by a no-entry (below). What's interesting is that the road was recently resurfaced and re-marked, which would have been the ideal opportunity to introduce a contraflow for cyclists. 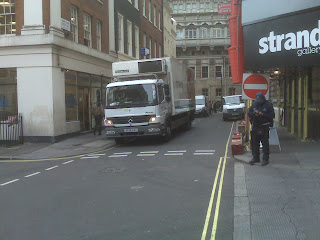 Similar problems exist to the north of The Strand. Maiden Lane is one-way eastbound, and Bedford Street is one-way southbound. So it's impossible for cyclists to avoid the congestion without a lengthy detour.

Why is the road layout the way it is? Because it is totally car-centric. It is designed to stop motors from avoiding The Strand by 'rat-running'. But  TfL/Westminster provide no means for cyclists to avoid the maze of one-way restrictions. It's the opposite of permeability.

It's very difficult to see whose interest this serves. If it wasn't so difficult and dangerous to ride legally between Aldwych and Trafalgar Square, more people might do so, and this could reduce road congestion and demand on public transport. Instead of which we have a massively congested section of road, and a number of other sections which are below capacity but cyclists are prevented from using.

Westminster Council's website claims: "The City Council supports and develops measures and initiatives that aim to encourage cycling." Really? Like what? Westminster do close to nothing to encourage cycling. There are fewer cycle facilities here than anywhere else in London - despite the fact that Westminster is the destination for many cycle commuter journeys and the 'hub' of the cycle hire scheme.
at 7:19 AM