I love the Wandle Trail, but there are some things about it that could be improved. The stretch between Morden Hall Park and Merantun Way is mainly a hardpack dirt track. It is not very well-constructed so in wet weather it becomes covered in pools of water. The picture below gives you an idea but in winter after a day's heavy rain it is worse - almost as wet as the Wandle itself - and no match for even the best mudguards. So you can forget about cycling to that business meeting if you don't want to look like you just returned from the Battle of the Somme. 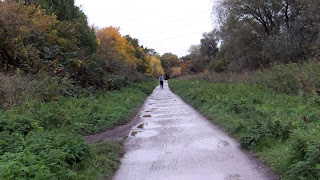 Meanwhile over at Wimbledon Common, the Conservators oppose tarmacing the existing paths to make them more cycle-friendly,  although this would not cost them a penny (the project would be paid for by Sustrans). Yet they're happy to tarmac the generously-sized and well-used car park (which they did in 2008). (Below) 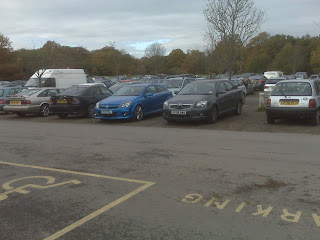 So, nothing 'natural-looking' about the car park. But the Common's tracks, in their current state could hardly be called natural. However, if you are a cyclist, they are rough, dusty in summer and muddy and waterlogged in winter. (Below) 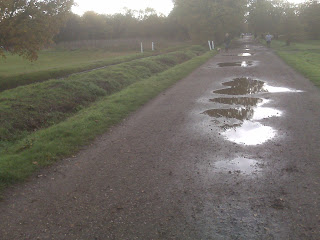 There is a predisposition against tarmac cycle tracks in any 'green' area in this country, although there is no such prejudice on the Continent. Yet any track with significant foot or cycle traffic will be surfaced with aggregate to avoid it becoming eroded or impassably muddy in winter, which rather negates the argument that parks and commons should remain as 'natural' as possible.

So cycling is caught in a pincer movement. On the one hand segregation in urban environments is opposed to avoid upsetting motorists or affecting motor traffic flow. On the other hand, where segregated (or usually shared use) paths exist in green areas, the surfacing is often unsuitable for UK weather conditions unless you don't care about getting muddy. All of which conspires to make cycling as a transport mode a lot more difficult and unpleasant than is necessary...
at 8:18 AM