Val Shawcross recently asked the following question of the Mayor of London:

Cycle Superhighways
Question No: 3295 / 2010
Valerie Shawcross
A Stockwell resident recently wrote to the South London Press to complain that ‘hundreds and thousands of pounds of taxpayers’ money’ has been spent on a Cycle Superhighway that ‘cyclists cannot use because it is full of parked cars and coaches. The cyclist has to ride in the centre of the road to avoid the parked cars, which surely defeats the purpose of the bike superhighway’. What advice do you have for cyclists and drivers on this matter?


Answer from the Mayor
Whilst promoting cycling, TfL has a legal duty as a Highway Authority to provide for the movement of people and goods. This means striking a carefully planned balance between the needs of all road users.


Barclays Cycle Superhighway 7 (Merton to the City) is marketed for cycle commuters, and is predominantly on TLRN red routes. This means that the cycle route is largely free of parked vehicles at the times that the vast majority of cycle commuters use it (0700-1000hrs and 1600-1900hrs). At other times, TfL allows short term parking and loading which is essential for local businesses and residents.

Let's look at this with a critical eye. "TfL allows short term parking and loading" for the most part is a lie. Most of the bays are restricted to loading for up to 20 mins between 10am and 4PM, but there are generally no restrictions on the length of stay after 7PM. "Essential for local businesses" ? Take a look at this bay, in Tooting: 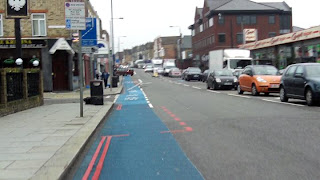 This is outside a pub. It's just after a light-controlled junction (Longley Road) - exactly where cars will be trying to overtake cyclists; exactly where a parked van will cause most danger. There is a side road on the left where loading could take place equally easily.


I suggest that most loading will take place in business hours i.e. before 7PM. Why is parking "essential" between 10am and 4pm but not at other times? While genuine loading might be classed as essential, I would be willing to bet most parking in the CSH  could not be classified as such. "Essential for residents" ? Genuine local residents are not going to park their cars in the CSH due to the need to move it by 7am. Is it essential for visitors to park on the CSH itself? That would be stretching the definition of "essential". Of course, if London had better cycle infrastructure, more people would cycle and there would be less demand for parking.

I wonder what TfL's definition of "essential" is? I wonder if they own a dictionary? Is the safety of cyclists essential? Clearly not to TfL, given my example above. I suggest that cyclists are especially in need of the safety of cycle lanes after dark.  It may be true that the majority of commuter cyclists use the CSH during the stated hours, but there is still significant cycle traffic after 7PM and the safety needs of cylists if anything increase after 7PM.

"Striking a carefully planned balance between the needs of all road users" is pure sophistry. The parking and loading restrictions for the most part haven't changed since CSH7 was put in. Given that the goal of the CSH was to "provide cyclists with safer, faster and more direct journeys" and to generate more cycle journeys, you would expect the balance, previously weighted heavily towards motor traffic, to have changed in favour of the safety of cyclists. It has not.
at 5:17 AM